Minamoto no Yoritomo's goes to Kyoto at beginning of the Kamakura Shogunate -- woodblock print by Utagawa Sadahide, circa 1860s

These years are known as the Kamakura period. The period takes its name from the city where the Minamoto shoguns lived.

After 1203, the Hōjō clan held the office of Shikken. In effect, the shikken governed in the name of the shoguns.

In 1192, Minamoto no Yoritomo and the Minamoto clan established a military government in Kamakura. The shogunate functioned within the framework of the Heian system of Imperial rule.

The Mongols under Kublai Khan attempted to invade Japan. On 19 November 1274 (Bun'ei 11, 20th day of the 10th month), Kublai Khan's army landed near Fukuoka in Kyūshū. The invaders retreated to Korea. This was called Bun'ei War (Bunei no eki). There was a second invasion attempt by Mongol forces in 1281 (Kōan 4). This was called the Kōan War (Kōan no eki). The shogunate prepared to defend against a third invasion, but it did not come. The costs of defense a weakened the shogunate.

In the Siege of Kamakura (鎌倉の戦い) in 1333 (Genkō 3), forces led by Nitta Yoshisada destroyed the Kamakura shogunate 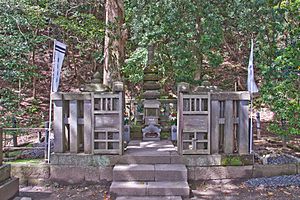 Grave of Minamoto no Yoritomo 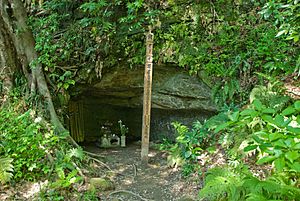 The flower and bamboo symbol of the Minamoto family.

All content from Kiddle encyclopedia articles (including the article images and facts) can be freely used under Attribution-ShareAlike license, unless stated otherwise. Cite this article:
Kamakura shogunate Facts for Kids. Kiddle Encyclopedia.