Hop-o'-My-Thumb (Hop-on-My-Thumb), or Hop o' My Thumb, also known as Little Thumbling, Little Thumb, or Little Poucet (French: Le petit Poucet), is one of the eight fairytales published by Charles Perrault in Histoires ou Contes du temps passé (1697), now world-renowned. It is Aarne-Thompson type 327B. The small boy defeats the ogre. This type of fairytale, in the French oral tradition, is often combined with motifs from the type 327A, similar to Hansel and Gretel; one such tale is The Lost Children.

The story was first published in English as Little Poucet in Robert Samber's 1729 translation of Perrault's book, "Histories, or Tales of Past Times". In 1764, the name of the hero was changed to Little Thumb. In 1804, William Godwin, in "Tabart's Collection of Popular Stories for the Nursery", retitled it Hop o' my Thumb, a term that was common in the 16th century, referring to a tiny person.

Hop-o'-My-Thumb (le petit Poucet) is the youngest of seven children in a poor woodcutter's family. His greater wisdom compensates for his smallness of size. When the children are abandoned by their parents, he finds a variety of means to save his life and the lives of his brothers. After being threatened and pursued by an ogre, Poucet steals his magic seven-league boots while the monster is sleeping. 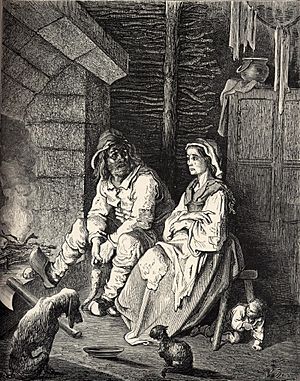 Illustration by Gustave Doré, from Les Contes de Perrault (1862), depicting Hop-o'-My-Thumb hiding under a stool, listening to his parents as they discuss abandoning him and his brothers.

A poor woodcutter and his wife are no longer able to support their children and intend to abandon them in a forest. Hop-o'-My-Thumb, overhearing his parents, plans ahead and collects small white pebbles from a river. He uses the stones to mark a trail that enables him to successfully lead his brothers back home. However, the second time round, he uses breadcrumbs instead, which the birds eat up.

The brothers are lost in the wood. Hop-o'-My-Thumb climbs up a tree and spots a distant light. The boys walk towards it. They come at last to a house, and learn that it belongs to an ogre. Hop-o'-My-Thumb, fearing the wolves, decides to take the risk of staying in the monster's residence.

The ogre allows the boys to sleep for the night, and provides a bed for them in his daughters' room. But the ogre wakes up not too long after, and prepares to kill them in their slumber. Hop-o'-My-Thumb, who anticipated the possibility, already planned ahead and replaced the daughters' gold crowns with the bonnets worn by him and his brothers. As a result, the ogre kills his daughters instead, and goes back to bed. Once he is snoring, Hop-o'-My-Thumb directs his siblings out of the house.

The ogre wakes up in the morning to discover his grave mistake, puts on his seven-league boots, and races after the boys. They spot the ogre while walking. Hop-o'-My-Thumb once again thinks fast and hides in a small nearby cave. The ogre, who is tired, happens to rest close to their hiding spot. Hop-o'-My-Thumb instructs his brothers to make their way home, and meanwhile, removes the boots from the sleeping ogre. He puts them on, and the boots, being magical, resize to fit him.

Hop-o'-My-Thumb uses the boots to make a fortune, and returns to his family's home, where they live happily ever after. 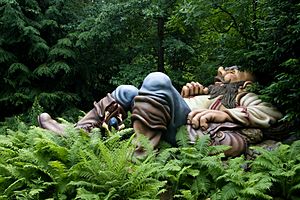 Hop-o'-My-Thumb with the sleeping ogre, as shown at the Efteling. 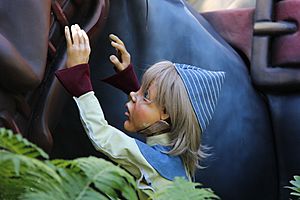 Hop-o'-My-Thumb, as shown at the Efteling.

All content from Kiddle encyclopedia articles (including the article images and facts) can be freely used under Attribution-ShareAlike license, unless stated otherwise. Cite this article:
Hop-o'-My-Thumb Facts for Kids. Kiddle Encyclopedia.