Diamonds and Toads facts for kids 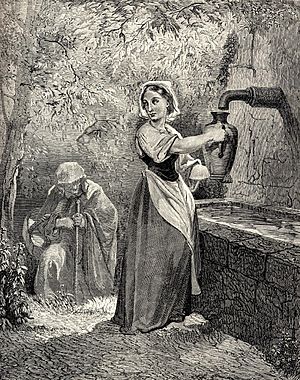 "Diamonds and Toads" (French: Les Fées) is a fairy tale by Charles Perrault. It first appeared in a handwritten and illustrated manuscript in 1695 called Contes de ma mêre l'oye (English: Tales of Mother Goose). The volume was intended for the king's niece, and included four other tales by Perrault. It was first published in Paris in 1697 by Claude Barbin in Histoires ou contes du temps passé (English: Stories or Tales of Past Times), a collection of eight prose fairy tales by Perrault. "Le Doie Pizzelle" (English: The Two Cakes) is a similar tale in Giambattista Basile's Pentamerone (1550-53). Other versions of Perrault's tale exist, including one collected in Hesse by the Brothers Grimm. Iona and Peter Opie write, "The theme of this tale is one of the most popular in the world, that of the proud and the privileged being brought low, and the meek and down-trodden being raised above them." Christopher Betts believes the tale was intended for a young audience, "old enough to appreciate that the unkind sister is 'rude' ... but not enough to object to the scarcely disguised nannyish advice."

A widow has two daughters. The elder is ugly and rude. The younger is beautiful and polite. The younger is sent to fetch water from a spring. An old woman dressed in rags (a fairy in disguise) asks for a drink of water. The girl politely gives her one. In thanks, the fairy causes diamonds and roses to drop from the girl's mouth whenever she speaks. At home, her mother is amazed. She sends her elder daughter to the spring. The girl meets a grandly-dressed lady (the fairy) who asks for a drink of water. The girl responds rudely. The fairy causes snakes and toads to drop from her mouth. At home, her mother is furious. She blames the younger sister. The girl runs into the woods. She meets a prince who falls in love and marries her. The elder sister dies after running away from home. A rhyming moral tells the reader that politeness and gentle words are worth more than jewels. They may bring unexpected rewards.

All content from Kiddle encyclopedia articles (including the article images and facts) can be freely used under Attribution-ShareAlike license, unless stated otherwise. Cite this article:
Diamonds and Toads Facts for Kids. Kiddle Encyclopedia.