Kids Encyclopedia Facts
Not to be confused with Montgomery, Lycoming County, Pennsylvania.

Montgomery County is included in the Philadelphia-Camden-Wilmington PA-NJ-DE-MD metropolitan statistical area, sometimes expansively known as the Delaware Valley. The county marks part of the Delaware Valley's northern border with the Lehigh Valley region of Pennsylvania. In 2010, Montgomery County was the 51st-wealthiest county in the country by median household income. In 2008, the county was named the 9th Best Place to Raise a Family by Forbes.

The county was created on September 10, 1784, out of land originally part of Philadelphia County. The first courthouse was housed in the Barley Sheaf Inn. It is believed to have been named either for Richard Montgomery, an American Revolutionary War general killed in 1775 while attempting to capture Quebec City, or for the Welsh county of Montgomeryshire (which was named after one of William the Conqueror's main counselors, Roger de Montgomerie), as it was part of the Welsh Tract, an area of Pennsylvania settled by Quakers from Wales. Early histories of the county indicate the origin of the county's name as uncertain.

The largest townships/boroughs in Montgomery County include:" 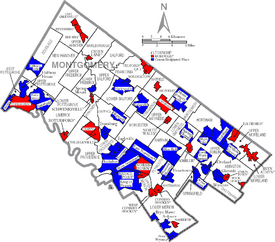 Census-designated places are geographical areas designated by the U.S. Census Bureau for the purposes of compiling demographic data. They are not actual jurisdictions under Pennsylvania law. Other unincorporated communities, such as villages, may be listed here, as well.

The population ranking of the following table is based on the 2010 census of Montgomery County. 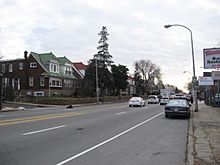 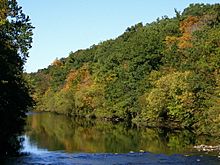 Montgomery County ranges from the densely populated rowhouse streets of Cheltenham Township to the forests and open land around the Perkiomen Creek in the northern part of the county.

Montgomery County is a suburb of Philadelphia and consequently, many of its residents work in the city. However, Montco is also a major employment center with large business parks in Blue Bell, Lansdale, Fort Washington, Horsham, and King of Prussia which attract thousands of workers from all over the region. The strong job base and taxes generated by those jobs have resulted in Montgomery County receiving the highest credit rating of 'AAA' from Standard & Poor's, one of fewer than 30 counties in the United States with such a rating. In 2012, Moody's downgraded the general obligation rating to Aa1, and in 2018 the rating was revised back to Aaa. 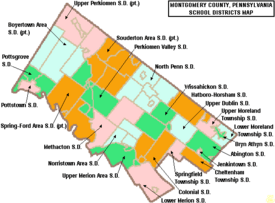 All content from Kiddle encyclopedia articles (including the article images and facts) can be freely used under Attribution-ShareAlike license, unless stated otherwise. Cite this article:
Montgomery County, Pennsylvania Facts for Kids. Kiddle Encyclopedia.