Bryn Athyn is a home rule municipality in Montgomery County, Pennsylvania, United States. It was formerly a borough, and its official name remains "Borough of Bryn Athyn". The population was 1,375 at the 2010 census. It was formed for religious reasons from Moreland Township on February 8, 1916.

"Bryn Athyn" was intended to mean "Hill of Unity" by its founders. "Bryn" is Welsh for "hill"; though the source of "athyn" is unclear.

According to the United States Census Bureau, the borough has a total area of 1.9 square miles (4.9 km2), none of which is covered with water.

There were 377 households, out of which 41.4% had children under the age of 18 living with them, 71.4% were married couples living together, 4.8% had a female householder with no husband present, and 22.5% were non-families. 19.4% of all households were made up of individuals, and 12.2% had someone living alone who was 65 years of age or older. The average household size was 3.21 and the average family size was 3.76. 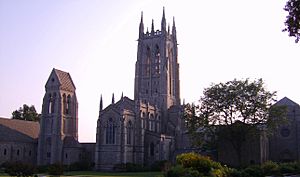 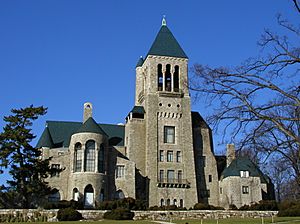 Academy of the New Church and Bryn Athyn College

Bryn Athyn is also the site of the General Church affiliated Academy of the New Church, which is the parent organization of the Academy of the New Church Secondary Schools, Bryn Athyn College, a divinity school, and the Swedenborg Library (which was named in honor of Emanuel Swedenborg). The New Church bases its doctrine on the Bible as illuminated by the writings of this Swedish theologian and scientist of the eighteenth century. Emanuel Swedenborg wrote such books as Principles of Chemistry, The Principia, The Economy of the Animate Kingdom and Arcana Coelestia.

Bryn Athyn had commuter train service until January 14, 1983. Service was suspended due to failing train equipment resulting in a lack of ridership. As of 2017, the train station is used as the Bryn Athyn post office.

In the ensuing years, there has been interest in resuming passenger service by Bucks County officials. Neighboring Montgomery County officials are supportive of re-thinking the rail corridor as well, though the belief within SEPTA management is that the section through Lorimer Park and Walnut Hill Station (the only sparsely populated section along the railway) will never generate enough riders to be feasible.

In September 2009, the Southampton-based Pennsylvania Transit Expansion Coalition (PA-TEC) began discussions with township officials along the railway, as well as SEPTA officials, about the realistic possibility of resuming even minimal passenger service to relieve traffic congestion in the region. Plans call for completing the electrification to Newtown, as originally planned in the late 1970s. Both Bucks and Montgomery County officials, as well as state representatives, have been receptive to PA-TEC's efforts, despite SEPTA's overall reservations. However, SEPTA has also confirmed that they are indeed open to revisiting the line if there is strong political support in both counties.

All plans for resuming the train service were dropped in 2014 when Montgomery County officials decided to extend the Pennypack Trail over the derelict rail bed.

In Bryn Athyn's railroad history, a devastating accident took place on December 5, 1921. Two Reading Railroad passenger steam trains collided head-on on a blind curve. The impact sent red hot coals flying forward from each engine, raining down on the wooden passenger cars of the oncoming train. Twenty-seven people were killed and some 70 injured. Most of those killed had burned to death, due in part to the fact that the wooden cars had burned so quickly and the inability of rescue workers to access the trains, given that they were wedged between the rock walls of the cut through hilly and wooded terrain without road access for fire equipment. The incident led to a ban on the use of wooden rail cars in order to prevent future disasters of a similar nature.

The Bryn Athyn borough is within the Bryn Athyn School District, which does not operate any public schools. 90% of school age children attend private schools within the district and the remainder attend schools in neighboring districts.

All content from Kiddle encyclopedia articles (including the article images and facts) can be freely used under Attribution-ShareAlike license, unless stated otherwise. Cite this article:
Bryn Athyn, Pennsylvania Facts for Kids. Kiddle Encyclopedia.