Woxall or sometimes Woxhall is a census-designated place (CDP) in Upper Salford Township, Montgomery County, Pennsylvania, USA. It is located on the east side of the Perkiomen Creek, which flows south into the Schuylkill River. The population was 1,318 at the 2010 census. It is served by the Harleysville post office with the zip code of 19438.

The village of Woxall was originally known as Kroppestettel, which in Pennsylvania Dutch means Crowtown. The village was later named Mechanicsville. By the end of the eighteenth century, the town contained a hotel and restaurant, town hall, shoe shop, wheelwright, and 12 homes. The village kept the name Mechanicsville until 1888 when a post office was established. A new name needed to be selected for the post office because another Pennsylvania town had the same name. After much discussion, residents submitted the name Noxall, "Knocks All" to postal authorities. The name had been read on the side of a bar of a box of soap in the village store. Evidently, they misread the "N" for a "W" and approved the name Woxall for the post office.

The Village of Woxall grew up near the Old Goshenhoppen Church, erected in 1744, where Lutheran and Reformed congregations met. With the arrival of the railroad in 1868, Salfordville, which prospered without railroad or trolley, grew around an old inn. By 1877, it contained a post office, general store, cigar factory, and 19 homes.

Other villages include Bergey, known in 1893 as Branchville, and Salford, called Rudy in the early 1900s. These two villages, along with Woxall and Salfordville, were noted for their general stores that sold a variety of items including fine clocks, furniture, barrel molasses, and quilting thread.

Woxall is rural area, where it is largely agriculture fields, woods, and some housing developments which have been built in the last 10 years. Woxall is one of the last areas in Montgomery County were there are dirt roads.

Also there are "deep parts"- as referred to by the locals. Where it is woods and nature preserves, there is a large population of deer and hunting is common in this area. This is the location of all the dirt roads inside of the village.

Woxall also has its own football league. Called Woxall Football, where they play football at Salford Hills Elementary School. The team is very successful and has faced and won to numerous teams such as Park Ave. of Harleysville pa.[https://mobile.twitter.com/WoxallFootball] 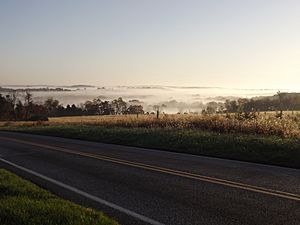 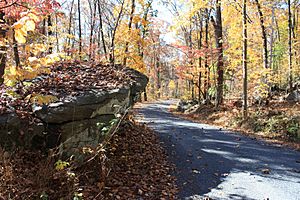 All content from Kiddle encyclopedia articles (including the article images and facts) can be freely used under Attribution-ShareAlike license, unless stated otherwise. Cite this article:
Woxall, Pennsylvania Facts for Kids. Kiddle Encyclopedia.