Lansdale is a borough in Montgomery County, Pennsylvania, northwest of Philadelphia. It is a densely-populated commuter town, with many residents traveling daily to Philadelphia using SEPTA Regional Rail's Lansdale/Doylestown Line. In 1900, 2,754 people lived here; in 1910, 3,551; and in 1940, 9,316 people were inhabitants of Lansdale. The population was 16,269 at the time of the 2010 census.

Lansdale is the center of the North Penn Valley, a region which includes the surrounding townships and boroughs. 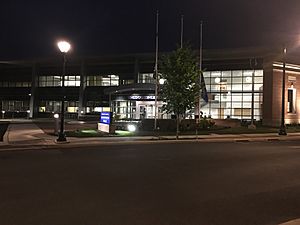 The earliest known settlers in Lansdale were members of the Jenkins family. At the peak of its growth, the Jenkins homestead occupied approximately 120 acres of land. The construction of the North Pennsylvania Railroad during the 1850s contributed to rapid growth and expansion in Lansdale. Employment opportunities generated by the railroad brought settlers, housing, and local businesses to the area. By 1872, Lansdale Borough was officially incorporated and named after Phillip Lansdale Fox, chief surveyor of the North Penn Railroad. By the naming conventions of the time, it should have been called Jenkintown, since the land immediately surrounding the train station was owned by the Jenkins family, but there was already a town by that name along the rail line.

The Jenkins Homestead and Lansdale Silk Hosiery Compy-Interstate Hosiery Mills, Inc. are listed on the National Register of Historic Places. 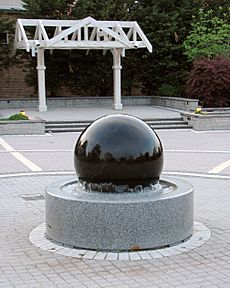 Lansdale is home to a Kugel ball, which is a dark grey granite sphere supported by a very thin film of water pumped from beneath its base. The Kugel Ball is located in Railroad Plaza, adjacent to the SEPTA Lansdale/Doylestown Line train station in downtown Lansdale. The plaza consists of a bricked patio with benches centered on the Kugel Ball and closes at 11:00 pm. An annual 5k race is held in June, accordingly named the Kugel Ball race, which starts and ends at the actual Kugel Ball in Railroad Plaza.

According to the United States Census Bureau, the borough has a total area of 3.1 square miles (8.0 km2), all land.

An episode of the Fox television series Fringe, which aired on September 24, 2009, was set in Lansdale. The scenes that took place in Lansdale were filmed in British Columbia, and the town was depicted as a rural area consisting primarily of corn fields and not as the densely populated suburban town that it actually is.

The beginning of the episode "Changes" of Season 7 of the Fox television series House, which aired on May 2, 2011, was set in Lansdale.

In the 1981 novel A Natural Weapon by Garry Mitchelmore, Lansdale is one of two towns (the other being Cache, Louisiana) that has its natural gas supply poisoned by terrorists.

According to the book "Weird Pennsylvania," Lansdale was also once home to one of the world's three "H Trees," which are believed to mark portals to Hell. An individual had only to circle the trees a certain number of times and jump off a small cliff, on the ledge of which the trees grew. Upon doing so, the portal would open and transport the individual to Hell.

The borough is also home to Mater Dei Catholic School of the Roman Catholic Archdiocese of Philadelphia. It was formerly home to St. Stanislaus School. In January 2012, the archdiocese announced that St. Rose of Lima School in North Wales would be merging with St. Stanislaus, with students attending classes in Lansdale at St. Stanislaus. The newly combined school was renamed from St. Stanislaus to Mater Dei, Latin for "Mother of God."

The DeSales University Lansdale Area Campus was an institute of higher education, with a campus specifically designed for adult students. The campus closed in 2019, with classes moved to the main campus in Center Valley or online. 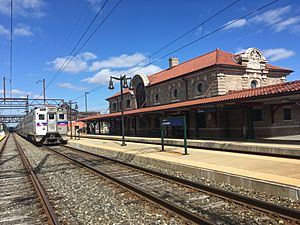 The main east–west street in Lansdale is Main Street (Pennsylvania Route 63), which runs northwest–southeast. The main north–south street is Broad Street, which runs southwest–northeast. Pennsylvania Route 363 begins at PA 63 on the western edge of Lansdale and heads southwest on Valley Forge Road. The Lansdale interchange of the Pennsylvania Turnpike Northeast Extension (Interstate 476) is located to the west of the borough in Towamencin Township and connects to PA 63.

Lansdale is served by SEPTA Regional Rail's Lansdale/Doylestown Line via Lansdale station in downtown, the Pennbrook station in the southern part of the borough, and the 9th Street station in the northern part of the borough, with service to Center City Philadelphia and Doylestown along with intermediate points. Three SEPTA Suburban Division bus routes serve Lansdale: the Route 94 connects the southern part of Lansdale with the Montgomery Mall and Chestnut Hill, the Route 96 connects Lansdale with the Norristown Transportation Center in Norristown, and the Route 132 connects the borough with the Montgomery Mall and Telford.

Lansdale is the headquarters of the Pennsylvania Northeastern Railroad, a short-line freight railroad. The Pennsylvania Northeastern Railroad operates the Lansdale Yard in the borough and provides freight rail service out of Lansdale to several points in the northern suburbs of Philadelphia on SEPTA-owned lines. The railroad interchanges with CSX Transportation in Lansdale.

Jefferson Health–Abington operates Jefferson Lansdale Hospital, which serves Lansdale and surrounding areas in the North Penn Valley. Jefferson Lansdale Hospital has 140 beds and over 700 employees, including over 300 physicians. Services offered at the hospital include an emergency room, Orthopedic and Spine Institute, Pain Center, Sleep Center, and Wound Care Center. The hospital, which was previously known as North Penn Hospital and later as Central Montgomery Medical Center, was acquired by Abington Memorial Hospital from Universal Health Services in October 2008, with the name changed from Central Montgomery Medical Center to its present name.

All content from Kiddle encyclopedia articles (including the article images and facts) can be freely used under Attribution-ShareAlike license, unless stated otherwise. Cite this article:
Lansdale, Pennsylvania Facts for Kids. Kiddle Encyclopedia.