Jenkintown is a borough in Montgomery County, Pennsylvania, about 10 miles (16 km) north of downtown Philadelphia. "Jenkintown" is also used to describe a number of neighborhoods surrounding the borough, which also are known by names such as Rydal, Jenkintown Manor and Noble. While the post office will deliver "Jenkintown"-addressed mail to these areas, they are not part of the political entity of Jenkintown; they are within Abington Township.

The television series The Goldbergs is set in Jenkintown, Pennsylvania. 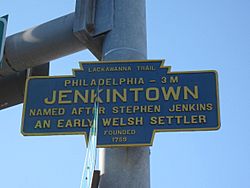 The community was named for Stephen Jenkins, a pioneer settler.

The Borough of Jenkintown is located just outside Philadelphia along the Route 611 corridor between Abington and Cheltenham Townships. The Borough was settled in about 1697 and incorporated on December 8, 1874 when approximately 248 acres (1.00 km2) was taken from Abington Township. Today, the Borough is approximately 0.58 square miles and is home to 4,500 residents.

The Borough is a mostly residential community that is separated into East and West by the Business District that runs along and surrounds Old York Road (Route 611) corridor. On the east side of Old York Road, residential development is predominantly characterized by larger detached single-family homes on lots larger than the Borough average. On the southeast side of York Road, there is a small mixed concentration of row homes, duplexes, and single-family residences. The majority of the residential development, however, is located to the west of York Road. This area consists of a traditional small town mix of detached single-family homes, duplexes, and row homes. Located throughout this area are several multi-family apartment buildings that are residential rental properties. At the center of this residential area are the Jenkintown Elementary School and the Jenkintown High School.

The Jenkintown Fire Department consists of two fire companies founded more than 125 years ago. The Jenkintown Fire Department is a totally volunteer department consisting of the Pioneer Fire Company #1 and the Independent Fire Company #2. The Pioneer Company was organized in 1884 and the Independent Company was organized in 1889, an artifact of the historical split between Catholics and Protestants in the population of the borough. The two fire companies have a total membership of approximately 150 with 50 members comprising the active firefighting crew.

The Jenkins' Town Lyceum Building and Strawbridge and Clothier Store are listed on the National Register of Historic Places.

All content from Kiddle encyclopedia articles (including the article images and facts) can be freely used under Attribution-ShareAlike license, unless stated otherwise. Cite this article:
Jenkintown, Pennsylvania Facts for Kids. Kiddle Encyclopedia.