Willow Grove Park Mall is a three-story shopping mall located in the community of Willow Grove in Abington Township, Pennsylvania at the intersection of Easton Road and Moreland Road (Pennsylvania Route 63). The Willow Grove Park Mall contains over 120 stores - with Bloomingdale's, Sears, Primark, Macy's, and Nordstrom Rack as anchor stores - along with several restaurants including The Cheesecake Factory, TGI Fridays, and Yard House. It is owned by Pennsylvania Real Estate Investment Trust (PREIT) and is the third most profitable mall in the Philadelphia area. The mall features a fountain, carousel, and scenic elevator. In October, the fountain is illuminated pink for Breast Cancer Awareness Month. 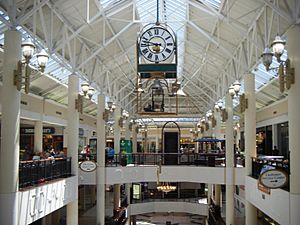 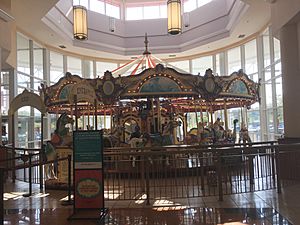 Carousel on the third floor of the mall 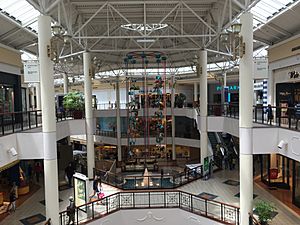 Third floor of the mall looking toward Primark

The mall was acquired by PREIT and the Pennsylvania State Employees' Retirement System in 2000 for US$140 million from a group of pension fund clients managed by Lend Lease Real Estate Investments. In 2001, the mall underwent a major renovation which included the addition of Macy's as an anchor, the construction of a 212,000 square feet (19,695 m2) parking garage with 800 parking spaces adjacent to Sears and the food court, and the addition of a carousel at the third-floor entrance opposite the food court. The renovation of the mall cost US$25 million. PREIT assumed full ownership of the Willow Grove Park Mall in 2003 by acquiring the Pennsylvania State Employees’ Retirement System's 70% share of ownership for US$122.3 million. In 2005, a mosaic wall with images from the former Willow Grove Park was installed in the mall. The mosaics were created by the Abington Art Center's Youth Empowerment Program and the Abington Township Balanced and Restorative Justice Program from designs made by Carol Strinton-Broad. In 2006, Strawbridge's closed due to the acquisition of its parent company May Department Stores by Federated Department Stores; a small portion of the former store on the upper floor became home to The Cheesecake Factory in September 2007. The lower two floors were planned to open as Boscov's; however, it never opened due to the chain filing for Chapter 11 bankruptcy in 2008.

On November 25, 2006, during one of the busiest shopping weekends of the year after Thanksgiving, a small fire broke out in the Forever 21 store that forced the evacuation of 6,000 shoppers; no injuries were reported. On the evening of June 15, 2011, a 16-year-old boy from Upper Moreland Township who was smoking synthetic cannabis jumped from the third level of the parking garage, suffering injuries.

A Macy's Backstage outlet store concept opened within the Macy's store on June 2, 2018. On January 24, 2018, the Abington Township Board of Commissioners approved plans for a Studio Movie Grill in the former JCPenney space. The Studio Movie Grill will be an 11-screen dine-in movie theater with a bar. Studio Movie Grill is planned to open in early 2020. On December 2, 2019, a Yard House restaurant opened at the mall in the space formerly occupied by Bravo! Cucina Italiana.

The opening of the Willow Grove Park Mall led to the decline of retail along Old York Road in Abington and Jenkintown, with department stores such as Bloomingdale's, Sears, and Strawbridge & Clothier relocating from this area to the mall during the 1980s. A Lord & Taylor store in the same area closed in 1989, but was eventually replaced by the King of Prussia mall location in 1995.

All content from Kiddle encyclopedia articles (including the article images and facts) can be freely used under Attribution-ShareAlike license, unless stated otherwise. Cite this article:
Willow Grove Park Mall Facts for Kids. Kiddle Encyclopedia.