Willow Grove is a census-designated place (CDP) in Montgomery County, Pennsylvania. A community in Philadelphia's northern suburbs, the population was 15,726 at the 2010 census. It is located in Upper Dublin Township, Abington Township and Upper Moreland Township. Willow Grove was once known for Willow Grove Park, an amusement park that was open from 1896 to 1976, now the site of Willow Grove Park Mall. Willow Grove is considered an edge city of Philadelphia with large amounts of retail and office space. 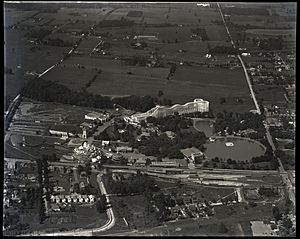 Aerial view of the Willow Grove Park amusement park in 1926

Willow Grove's history spans nearly three centuries. Following a land grant established by William Penn, known as the Manor of Moreland, the first home was built in 1719. The colonial farmstead slowly grew into a small rural community. By the mid-19th century, Willow Grove served as a summer vacation retreat for Philadelphia residents.

Dr. Nicholas More, an English friend and business associate of William Penn, was granted 9,815 acres of land at an annual rent of a silver shilling for every 100 acres. Originally known as “The Manor of Moreland”, it became the Township of Moreland in 1718. The name officially became Willow Grove about 1792 when it appeared on a map of Pennsylvania townships. The planting of willow trees to absorb the surrounding swampland strengthened the decision to give Willow Grove its name.

The Willow Grove area enjoys its place in Revolutionary War history, as well. Washington’s troops marched through Willow Grove in 1777 on their way to the Battle of Brandywine, and the famous Battle of Crooked Billet took place in the vicinity of Hatboro. The Willow Grove area was also a major player in the efforts of the Underground Railroad during the Civil War. Old York Road was a primary route through Pennsylvania, leading slaves to freedom in Canada.

As with many early communities, Willow Grove experienced rapid growth and development, thanks to railroad and trolley expansion toward the end of the 19th, and early 20th centuries. Less than a day’s trip away from Philadelphia and attracted by the country, more and more inns and restaurants sprang up. The economy enjoyed a growth spurt and the Willow Grove area blossomed.

“Life is a lark in Willow Grove Park” With travel and accommodations readily available and to stimulate travel on the increasingly popular trolleys, the Philadelphia Rapid Transit Company decided to build an amusement park in Willow Grove, at the end of the line. Willow Grove Park opened in 1896 and was the prototype for numerous parks that followed across the country.

The Park also enjoyed its reputation as the “Music Capital of America” with orchestras and bands, especially John Philip Sousa, who was a regular in the band shell starting in 1901. In 1926, more than 100,000 people attended Sousa’s last annual concert in the park, after twenty-five years of making music in the area. In 1976, Willow Grove Park gave way to innovation and progress once again, when it was razed to make way for a new retail concept – the mall. The Willow Grove Park Mall opened in 1982. As they had since the early days, the residents of Willow Grove were ready once again to innovate and grow. 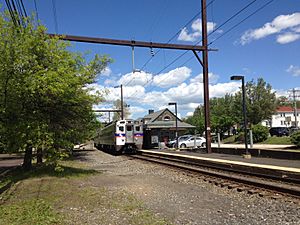 Asplundh Tree Expert Company is based in Willow Grove.

All content from Kiddle encyclopedia articles (including the article images and facts) can be freely used under Attribution-ShareAlike license, unless stated otherwise. Cite this article:
Willow Grove, Pennsylvania Facts for Kids. Kiddle Encyclopedia.