Glenside is a census-designated place (CDP) located in Cheltenham Township and Abington Township in Montgomery County, Pennsylvania, United States. It borders Northwest Philadelphia. The population was 7,737 at the 2020 census on a land area of only 1.3 square miles. Glenside is most notable for its entertainment like the Keswick Theatre, restaurants, recreational facilities and parks. The Glenside station is one of the busiest in the SEPTA system. Glenside is located about six miles from Center City, Philadelphia.

Glenside is bordered to the south by Wyncote, the east by Jenkintown, west by Laverock and Cheltenham Township section of North Hills, and to the north by the Abington Township neighborhoods of North Hills, Ardsley, Roslyn, and Abington. According to Niche, a new set of rankings claim that Glenside has been named one of the best places to live in Pennsylvania for 2019. "Glenside was ranked as the 37th best place to live in Pennsylvania, and also placed high on several other lists." 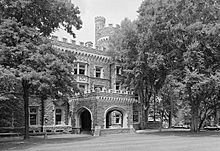 According to the United States Census Bureau, the CDP has a total area of 1.3 square miles (3.4 km2), all of it land.

Glenside is a part of 3 different townships: Abington Township, Springfield Township, and Cheltenham Township, with the latter being where the majority of Glenside is located, including the United States Post Office, Glenside Library, and Glenside Memorial Hall.

The altitude ranges from 232 feet near Glenside Memorial Hall to 405 feet on Sunset and Lindley Roads. The majority of Glenside is around 300 feet in elevation; it is 238 feet at the intersection of Waverly and Easton roads, the center of Glenside.

There were 3,103 households, out of which 31.3% had children under the age of 18 living with them, 52.7% were married couples living together, 9.2% had a female householder with no husband present, and 35.1% were non-families. 28.8% of all households were made up of individuals, and 9.7% had someone living alone who was 65 years of age or older. The average household size was 2.54 and the average family size was 3.21. 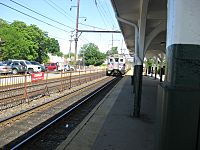 A SEPTA Main Line train pulling out of Glenside 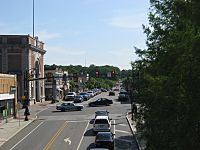 Easton Road is the main street of Glenside 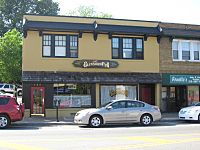 The Glenside Pub in downtown Glenside

Glenside is located at about a 30-minute drive to downtown Philadelphia, 2 hours to New York City, 2 hours to the Pocono Mountains, and 1.5 hours to the Jersey shore. Glenside has nearby access to the Pennsylvania Turnpike and is within relative proximity to many major US highways, such as US Route 1, Interstate 95, Interstate 76, and US Route 30.

Glenside is served by SEPTA Regional Railroad at the Glenside Train Station. The station, originally known as Abington Station, has its roots back with the North Pennsylvania Railroad and the Reading Railroad. Trains north split at Carmel Interlocking, just north of the station, and either go to Lansdale/Doylestown Line or the Warminster Line. Trains going south go to Philadelphia, which is about a 25-minute ride to Jefferson Station and 35 minutes to 30th Street Station. Express trains make it to Center City in as little as 21 minutes. With two lines serving the station, plus a handful of trains terminating in Glenside, the frequent train service makes Glenside an attractive place to live. Glenside is also served by SEPTA buses, in particular, routes 77 and 22.

Glenside also has several major local roads, such as:

Pennsylvania Route 73 provides a connection with western Montgomery County and New Jersey. In Glenside, it is known as Church Road.

Pennsylvania Route 309 also known as the "Fort Washington Expressway" or just "309," is a 2-lane highway providing a direct access to the Pennsylvania Turnpike. The southern terminus of 309 is about 1 mile from downtown Glenside.

Pennsylvania Route 152 also known as "Limekiln Pike," runs through Glenside, after it intersects with 309. It then proceeds to intersect with 73, and eventually continues north into Bucks County 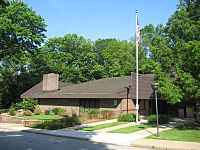 The Exterior of Glenside Free Library 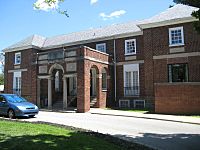 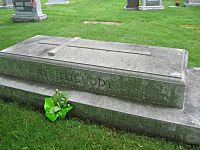 The annual Independence Day parade held in Glenside every July 4 is reported to be the largest such parade in the greater Philadelphia area. The parade began in 1904 and is now sponsored by the Greater Glenside Patriotic Association. It is a very traditional parade, including all the area volunteer fire companies, a variety of bands and other musical performers, church groups and community organizations, and local and state elected officials (Former-Governor Ed Rendell has been a frequent participant). One unique and much-anticipated show is the Schuylkill County Motorcycle Drill Team. It is one of the nation's longest consecutive Fourth of July parades. 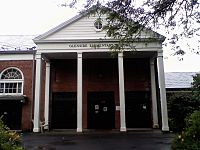 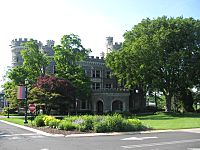 Since Glenside is located in Cheltenham, and Abington Townships, not all Glenside residents go to schools within the same district. A Glenside resident will follow one of these paths, depending on which township they live in.

Saint Luke Catholic School in Glenside, Abington Township, is a parochial school part of St. Luke The Evangelist Roman Catholic Church with approximately 315 students as of 2019, including 42 in their pre-school program.

Glenside is home to Arcadia University, a private co-educational four-year liberal arts university. Arcadia is well known for its Study Abroad programs, which two-thirds of their students participate in. The University offers majors in the College of Arts and Sciences, College of Health Sciences, School of Education, and School of Global Business. The campus is set on National Historic Landmark Grey Towers Castle, which was built in 1893.

All content from Kiddle encyclopedia articles (including the article images and facts) can be freely used under Attribution-ShareAlike license, unless stated otherwise. Cite this article:
Glenside, Pennsylvania Facts for Kids. Kiddle Encyclopedia.