Wyncote is a census-designated place (CDP) bordering North Philadelphia in Cheltenham Township, Montgomery County, Pennsylvania, United States. Wyncote is located 5 miles from Center City Philadelphia at the southeasternmost tip of Montgomery County. The Jenkintown-Wyncote SEPTA station is the fifth busiest regional rail station in the SEPTA system, and by far the busiest in Montgomery, Delaware, Chester, and Bucks Counties.

According to the United States Census Bureau, the CDP has a total area of 0.8 square miles (2.1 km2), all of it land. 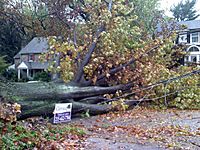 Damage in Wyncote from Hurricane Sandy in 2012

Wyncote features the Wyncote Historic District which is a US Historic district, added in October, 1986. It was made a historic district for its Architecture, Community Planning, and Development. The district covers over 100 acres, and 178 contributing buildings.

The Wyncote Historic District has a number of restored Victorian-era homes. The All Hallows Church (constructed 1896–1897) was designed by a firm founded by Philadelphia architect Frank Furness (Furness, Evans and Company). Wyncote also has a number of classical Philadelphia stone colonial revival homes; notable among them is Beechwood, designed in the school of Brognard Okie, the architect responsible for the reconstruction of Pennsbury Manor on the upper Delaware River, and Appleford in Villanova, Pennsylvania. 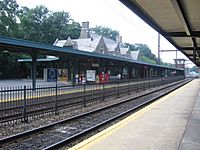 The Jenkintown-Wyncote station is one of the busiest in the SEPTA system.

Wyncote is served by SEPTA, through regional rail at the Jenkintown-Wyncote train station. The building is a historic structure, dating back to its original use with the North Pennsylvania Railroad. Trains pass through about every twenty minutes going south to Philadelphia or north to Bucks County. Wyncote is a 30-minute train ride from downtown Philadelphia. Wyncote is also served by SEPTA buses, in particular the 77 route, which connects Chestnut Hill to North Philadelphia.

Wyncote is in a convenient location driving-wise; about a 25-minute drive to downtown Philadelphia, 2 hours from New York City, 2 hours to the Pocono Mountains, and 1.5 hours to the Jersey shore, just to name a few accessible locations. The following are the most heavily traveled roads in Wyncote: 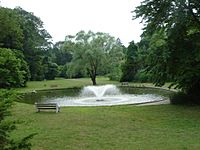 Robinson park in Wyncote. The pond in the background typically freezes, and provides recreation for the locals. 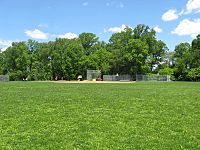 All content from Kiddle encyclopedia articles (including the article images and facts) can be freely used under Attribution-ShareAlike license, unless stated otherwise. Cite this article:
Wyncote, Pennsylvania Facts for Kids. Kiddle Encyclopedia.