Montgomery Mall is a two-story shopping mall located in the community of Montgomeryville in Montgomery Township, Pennsylvania near the borough of North Wales. The mall, owned 79.4% by Simon Property Group, is located along Pennsylvania Route 309 (Bethlehem Pike) at the intersection with U.S. Route 202 Business (Dekalb Pike), amidst other commercial development. It contains 105 stores and eateries. 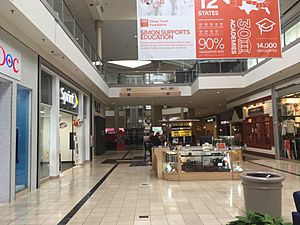 Strawbridge's closed in 2006 as a result of Federated Department Stores acquiring May Department Stores, with Boscov's taking over the former store in 2007. The Boscov's store closed in October 2008 as part of their restructuring. Dick's Sporting Goods was also added in 2008. In November 2011, it was announced that a 126,000 sq ft (11,700 m2) Wegmans would replace the vacant Boscov's. This store was planned to be the first Wegmans located in a shopping mall. The former Boscov's store was demolished in the process of constructing the new Wegmans. The Wegmans store opened on November 3, 2013.

The Montgomery Mall has recently gone under reconstruction. This renovation had a cost of $8 million and the main purpose was to redesign exterior and entrance, restrooms and upgrade lighting.

On November 7, 2019, it was announced that the Sears store at Montgomery Mall would close as part of a plan to close 96 stores nationwide. Liquidation sales began on December 2, 2019. The store closed in February 2020.

All content from Kiddle encyclopedia articles (including the article images and facts) can be freely used under Attribution-ShareAlike license, unless stated otherwise. Cite this article:
Montgomery Mall (Pennsylvania) Facts for Kids. Kiddle Encyclopedia.