Wyndmoor is a census-designated place (CDP) in Springfield Township, Montgomery County, Pennsylvania, US. The population was 5,498 at the 2010 census. Wyndmoor has the same ZIP code, 19038, as the towns of Glenside, North Hills, and Erdenheim.

According to the United States Census Bureau, the CDP has a total area of 1.6 square miles (4.1 km2), all of it land.

Wyndmoor is served by SEPTA's Wyndmoor train station, which is actually not in Wyndmoor, but in the nearby Chestnut Hill neighborhood of Philadelphia. Bus routes serving Wyndmoor include the 77 and L routes.

William Penn, the founder of Pennsylvania, reserved Springfield Township as one of his family's original manors in the 1680s.

The origin of the name "Wyndmoor" is somewhat obscure. The community was earlier called "Bungtown," "Spring (or Springfield) Village," and "Tedyuscung," after the Native American leader, Teedyuscung, whose statue stands overlooking the Wissahickon Creek in Valley Green. "Wyndmoor" is variously said to be an appellation offered by the Heebner family who donated land for the Reading Railroad station, or originally the name of the estate of Randal Morgan, who made a fortune in oil and purchased property adjacent to the Reading Railroad station about 1900. The name eventually replaced the name "Springfield Village" for the small collection of shops and houses just east of Stenton Avenue, and finally encompassed the entire residential area east of Stenton Avenue.

Wyndmoor was the site of Whitemarsh Hall, the 300-acre (1.2 km2) estate of banking executive Edward T. Stotesbury. The estate became a housing development in the late 1940s, and the 147-room mansion was demolished in 1980, but the columns of its portico and pieces of statuary survive in the neighborhoods of Wyndmoor.

The Stotesbury Club House and John Welsh House are listed on the National Register of Historic Places.

Wyndmoor Hose Company No. 1 was formed in 1906 and chartered in 1907. The seeds of the local fire company grew out of an industrial base at Mermaid Lane and Queen Street. There, the Nelson Valve Company began an in-house fire brigade to meet the needs of the dangerous industrial mechanisms used to make hydraulic valves. Eventually, the local community was solicited for its help in keeping this fire unit viable and expanding its services to the larger community. Residents volunteered, recognizing the communal benefit, and with help from the valve company a two-wheeled hand cart was purchased and 500 feet of hose. By 1909, the shed used at the valve Company was expanded, as were the hose carts to four wheels and two horses. Horse power proved a problem. A monetary reward was granted to the first horse team to arrive at the sound of the alarm and haul the apparatus to the scene. This actually produced a rivalry among horse teams!

At the dawn of the Roaring Twenties the fire company got a new home, on Queen Street closer to Willow Grove Ave. It still stands and served as a firehouse for nearly 50 years. In 1927, Wyndmoor purchased two Hale Pumpers and in 1940 a city service ladder truck. As the nations infant automotive industry diversified and began to specialize, communities began purchasing recognizable fire apparatus. A huge property along Willow Grove Ave. was purchased by the fire company, and large fairs were held for a dozen years. The proceeds from these carnivals offset astronomical costs and allowed the continued modernization of the fire service in Wyndmoor.

Wyndmoor Hose Company is a 100% volunteer department. The fifty-plus members who make up the working force are notified by digital paging systems, day and night, 24 hours a day, 7 days a week, 365 days a year. 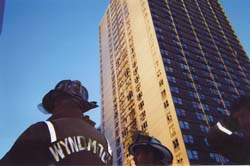 Beyond fire suppression activities, WHCo is active in the community in many other ways. Fire prevention programs have always been a primary focus. The company keeps a busy schedule with weekend birthday parties held at the station, sometimes multiple parties each day. The parties often include a 15–30-minute presentation on fire safety. Throughout the year WHCo presents fire prevention programs to local schools, camps, day-care facilities, and other businesses and organizations. Annual demonstrations are made to The Boy Scouts of America to display not only safety messages, but also drunk-driving warnings.

Equally importantly, WHCo has forged a relationship, approaching almost a decade long, with UCP – United Cerebral Palsy. UCP is a nearby organization who provides direct services to over 2,400 adults, children and their families with a variety of disabilities including cerebral palsy, head trauma, stroke and spinal cord injury. Groups of Wyndmoor firefighters can be found at any one of UCP's six annual fundraising events.

Monday nights are busy nights for Wyndmoor volunteers. Almost fifty weeks a year, Wyndmoor firefighters meet Mondays from 6:45 pm through 9:30 pm to maintain, test, practice, discuss, and plan for fire and rescue-related events. Beyond these evenings, special joint training sessions might be scheduled for weekends or other evenings throughout the year. While all firefighters must engage in no less than eighty hours of academy training before stepping foot on a fireground, the reality holds true that the training never ends.

In the late 1990s it was decided that the fire company would add emergency medical services to its already expanded list of rescue operations. The company purchased the QRS (Quick Response Service) unit that houses enough basic life support and first-aid equipment to complement the Springfield Ambulance Association's arrival.

Today Wyndmoor Hose Company, No. 1 is equipped to respond to virtually any emergency. From building fire to vehicle rescue, from hazardous material to emergency medical situations, Wyndmoor has personnel that are well trained and highly skilled prepared to act.

Notable current and former residents of Wyndmoor include:

All content from Kiddle encyclopedia articles (including the article images and facts) can be freely used under Attribution-ShareAlike license, unless stated otherwise. Cite this article:
Wyndmoor, Pennsylvania Facts for Kids. Kiddle Encyclopedia.