Horsham is a census-designated place (CDP) in Montgomery County, Pennsylvania, United States. The population was 14,842 at the 2010 census. Horsham is located entirely within Horsham Township, and it is home to the Horsham Air Guard Station at the former site of Naval Air Station Joint Reserve Base Willow Grove.

According to the United States Census Bureau, the CDP has a total area of 5.5 square miles (14 km2), all land.

The climate in this area is characterized by hot, humid summers and generally mild to cool winters. According to the Köppen Climate Classification system, Horsham has a humid subtropical climate, abbreviated "Cfa" on climate maps.

There were 5,798 households, out of which 33.5% had children under the age of 18 living with them, 54.5% were married couples living together, 9.6% had a female householder with no husband present, and 32.6% were non-families. 26.5% of all households were made up of individuals, and 6.3% had someone living alone who was 65 years of age or older. The average household size was 2.54 and the average family size was 3.12. 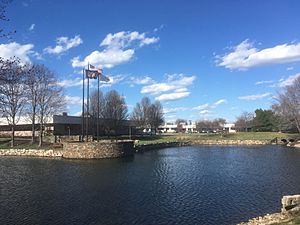 Schools in Horsham are part of the Hatboro-Horsham School District.

All content from Kiddle encyclopedia articles (including the article images and facts) can be freely used under Attribution-ShareAlike license, unless stated otherwise. Cite this article:
Horsham, Pennsylvania Facts for Kids. Kiddle Encyclopedia.