Plymouth Meeting is a census-designated place (CDP) that straddles Plymouth and Whitemarsh Townships in Montgomery County, Pennsylvania, United States. The settlement was founded in 1686.

The area was originally settled by members of the Religious Society of Friends, or Quakers, who built the Plymouth Friends Meetinghouse in 1708. They sailed from Devonshire, England, on the ship Desire, arriving in Philadelphia on June 23, 1686. The settlement takes its name from the founders' hometown of Plymouth in Devon.

During the Revolutionary War, in May 1778, the Plymouth Friends Meetinghouse served as a temporary military hospital. General George Washington, then at Valley Forge, learned that a British force intended to seize the area and cut off movement of the Continental Army. He sent the Marquis de Lafayette and 2,100 troops to counter. They camped around the meetinghouse on the night before the May 19 Battle of Barren Hill. The next morning the British arrived with a massive force of 16,000, and tried to cut off any escape route. But Lafayette took advantage of the Americans' knowledge of local roads, and managed to successfully escape with minimal casualties. 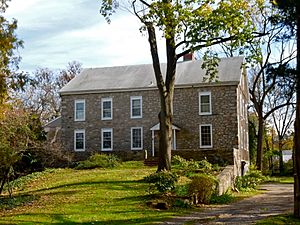 Slave holding was condemned by the Society of Friends in 1754, very few slaves were held in Plymouth Township, and only one by the year 1830. The Maulsby and Corson families were early abolitionists, sheltering runaway slaves beginning in the 1810s and turning their properties into stations on the Underground Railroad. The Fugitive Slave Act of 1850 increased the penalties for giving assistance to an escaped slave to six months in prison and a $1,000 fine. It allowed slavecatchers to pursue a fugitive across state lines into every U.S. state and territory. Local resident George Corson was involved in hiding Jane Johnson, whose 1855 escape exposed a loophole in the federal law. When the doors to local churches and schools were closed to Abolitionist speakers, Corson built Abolition Hall (1856) on his farm at Germantown and Butler Pikes. The hall could accommodate up to 200 people, and hosted speakers such as; Frederick Douglass, Harriet Beecher Stowe, Lucretia Mott, Mrs. Stephen Foster, and William Lloyd Garrison.

In later years (1881-1895) Abolition Hall became the art studio of one of the nation’s most famous painters, Thomas Hovenden. Married to George Corson’s daughter, Helen (Corson) Hovenden, Hovenden was best known for painting realistic scenes taken right out of American life as he experienced it in the farmlands of Plymouth Meeting. A modest man who lived simply and embraced his in-laws’ Quaker faith, his depictions of everyday life during the Civil War feel as if one is looking at photographs rather than oil paintings. One of his most famous paintings,“Breaking Home Ties,” (shown below) as well as several others, can be seen in the Philadelphia Museum of Art. Hovenden succeeded Thomas Eakins as the principal painting instructor at the Pennsylvania Academy of Fine Arts in 1886 after the latter was forced to resign for inappropriate use of nude models. In 1895, Hovenden died suddenly at the age of 55 when he was run over by a train at the crossroads in Germantown while trying to rescue a small girl who had wandered onto the tracks. Sadly, just six years after his death a fire claimed the art studio, historic building and all its contents. Fortunately, his widow had already removed many of his paintings and historical artifacts collected over his lifetime but the destruction of the building is a tremendous loss to historians. For decades after his death, art critics and collectors dismissed his work as old-fashioned. It was only in 1995, a hundred years after his death, when an exhibition of his life’s work finally brought Hovenden recognition as America’s best-known painter of heroic scenes of the Civil War era.

Growth continued for Plymouth Meeting during the 1900s which lead to the advent of the Pennsylvania Turnpike, the Plymouth Meeting Mall, many high-rise and garden apartment complexes, significant modern industries and office buildings. Many notable businesses maintain their American headquarters in Plymouth Meeting, most notably the Swedish furniture company, IKEA.

What is now Germantown Pike was ordered laid out by the Provincial Government in 1687 as a "cart road" from Philadelphia to Plymouth Meeting. The actual road was not finished until 1804, when it was built at a cost of $11,287. A road from Plymouth Meeting to Gwynedd appears to have been built in 1751. What is now Chemical Road, following Plymouth Creek, was opened in 1759 to provide access to a new gristmill.

In the early 19th century the Hickorytown Hotel, on Germantown Pike opposite Hickory Road, was a prominent road house. Robert Kennedy, an officer in the Revolution, operated the inn in 1801. In 1806 it was kept by Frederick Dull and in 1825, Jacob Hart. In the beginning of the 19th century it was a training place for the 36th Regiment of the Pennsylvania Militia and the Second Battalion of Montgomery County. The Friendship Company for the Protection against Horse Stealing was organized there in 1807. Township elections were held there as well, and a post office was established there in May 1857. The Plymouth Meeting Post Office appears to have been established sometime prior to 1827.

In 1754, Benjamin Davis received a license to keep an inn on Ridge Pike at Plymouth Creek. This inn, the Seven Stars, was shown on maps as early as 1759. The inn was demolished in 1975 to make way for the Midcounty Expressway.

Early records indicate that one person was elected as "road supervisor" and tax collector. The roads were mostly dirt, and the repair and maintenance was often auctioned off to the lowest bidder, usually a farmer who had large properties and kept many men and horses, and the smaller farmers worked on the roads for them.

Tax records show that the taxpayers had the privilege of working out their taxes on the roads. From 1846 to 1854 the road supervisor was paid one dollar per day for his work as supervisor and collector of taxes. Men working on the roads received $.80 per day and boys received $.40 per day. For the use of a double team of horses with a wagon or cart, one was paid $1.75 per day. Among the 1850 assessments may be found such familiar present-day names as Corson, Cleaver, Davis, Evans, Williams, Fischer, Gillinger, Hallman, Jones, Marple, Rodenbaugh, Sheppard, Shoemaker, Staley and Wood.

Among early industries in Plymouth Township was the Hickorytown Forge operated by the Wood family, and a forerunner of the present Alan Wood Steel Company. The name Plymouth Furnace appears in the records about 1847 and was engaged in the manufacture of nails.

In 1863, a company named Plymouth Iron Company was organized with a capital of $30,000.00. The company purchased the property of Colwell Furnace, which is located just west of the present Colwell Lane adjoining the development known as Farmview Village.

The Plymouth Railroad was built in 1836 to serve some 20 lime kilns operating along the route between Conshohocken and Cold Point. In 1870, the line was acquired by the Philadelphia and Reading Railroad and was rebuilt and extended to Oreland at a junction with the North Penn Railroad. The line was abandoned by the 1970s.

Prior to the building of the Plymouth Railroad, the Philadelphia, Germantown, and Norristown Railroad was built along the Schuylkill River through Plymouth Township and commenced operation in 1835. For most of its history, this railroad was part of the Reading Railroad system. Today these tracks are SEPTA's Manayunk Norristown passenger train line.

The Schuylkill Valley Division of the Pennsylvania Railroad was built parallel to the Reading Railroad tracks along the Schuylkill River, opening for service in 1884. Rail service ended in the 1970s and the track-bed is now occupied by the multi-use (pedestrian and bicycle) Schuylkill River Trail.

Later in the 1890s electric trolley lines were built through Plymouth Meeting. The trolleys that ran on the shoulder of Germantown Pike connected Chestnut Hill and Norristown. The trolley on the shoulder of Butler Pike was a short shuttle known as the Harmanville Dinkey, with a single car running only between Germantown Pike and Ridge Pike (0.7 miles). Dinkey passengers transferred to Conshohocken-bound trolleys at the corner of Ridge Pike and Butler Pike. For most of their existence the trolley lines were operated by the Reading Transit & Light Company (no relation to the Reading Railroad). In addition to passengers, during the 1910s freight was also handled by the RT&L trolleys; an abandoned wooden track-side freight platform near the northwest corner of Germantown Pike and Butler Pike survived into the 1950s. The Harmanville Dinkey was replaced with buses in 1927. The Germantown Pike trolleys ceased operation in December 1931. The trolley that ran from Norristown to Conshohocken through Black Horse, Seven Stars and Harmanville was replaced with buses in September 1933. The roadside trolley tracks were quickly torn up and the adjacent two-lane Ridge Pike, and Butler Pike south of Ridge Pike, were widened to accommodate ever-increasing motor vehicle traffic.

The first school in the township was established by the Plymouth Meeting Society of Friends in 1780, although some records indicate a school in operation there before that date. A school was established at Cold Point in 1821. Public schools, established under the system authorized by the legislature in 1834, included Cold Point School on Cold Point Hill, Plymouth Valley School on Butler Pike adjacent to the Friends meeting property, the Eight Square school on North Lane (then known as Spring Mill Road), the Sandy Hill school in Black Horse (now the site of L. Frank Markel and Sons factory) and the North Star school on Germantown Pike on property presently housing Plymouth Center Union Mission church.

Plymouth became a township of the first class in January 1922. Mr. Isaac J. Sheppard became township secretary at that time and served as secretary until his voluntary retirement in 1952. Under the new form of government the board changed from one of three "road supervisors" to one of five "Township Commissioners". Many gradual changes commenced at that time. Street lights were installed in the built-up sections, fire hydrants were installed at critical locations. By 1924, two fire companies were in operation, the Plymouth Fire Company and the Harmonville Fire Company.

In 1925, the Board of Health was organized. Plumbing inspection began in 1934. In 1939, Plymouth adopted a "modern" zoning ordinance. A building code ordinance was also adopted. In 1947, the first subdivision ordinance was adopted. In 1952, the Township Planning Commission was created, and a Recreation Committee was established to study the recreation needs of the township. Growth continued throughout the 1960s and 1970s, which saw the advent of the Pennsylvania Turnpike, the Plymouth Meeting Mall, high rise and garden apartment complexes, and many modern industries and offices.

Plymouth Township adopted a Home Rule Charter in 1972. Government under a Home Rule Charter allows a municipality to take any governmental or administrative actions it requires, unless such actions are prohibited by general laws of the Commonwealth. With this charter in place, citizens and their elected officials are given more governing power, and there is more of an opportunity for public involvement in governing procedures and decisions.

From as early as 1688, lime kilns have been a large, productive and profitable business in Plymouth Meeting and continue to be so today. 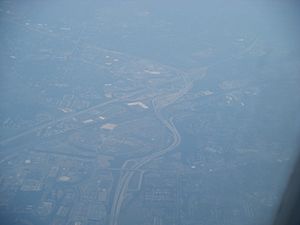 Interstate 476 and the Pennsylvania Turnpike pass through the township. The area is easily accessible to Interstate 76 and the "Main Line" points across the river.

The historic Plymouth Friends Meetinghouse, built in 1708, is located within the town.

All content from Kiddle encyclopedia articles (including the article images and facts) can be freely used under Attribution-ShareAlike license, unless stated otherwise. Cite this article:
Plymouth Meeting, Pennsylvania Facts for Kids. Kiddle Encyclopedia.