The Plymouth Meeting Mall is a 952,200 square feet (88,460 m2) shopping mall in the community of Plymouth Meeting in Plymouth Township, Pennsylvania, approximately 17 miles (27 km) northwest of Center City, Philadelphia. It is located at Germantown Pike and Hickory Road, near the Mid-County Interchange where the Pennsylvania Turnpike (I-276) crosses the Northeast Extension/Blue Route (I-476). The mall was built by The Rouse Company in 1966. The mall features a fountain and a carousel.

Plymouth Meeting Mall currently contains more than 70 specialty stores and restaurants, including a central Food Court, and outlying restaurants California Pizza Kitchen, P.F. Chang's, Redstone American Grill, Dave & Buster's, Benihana, Bertucci's, and King Buffet. Its original anchor stores Strawbridge & Clothier and Lit Brothers are now occupied by Burlington, Dick's Sporting Goods, Michaels, and Edge Fitness - which all occupy an anchor space that was Macy's until 2017 - and Boscov's. The Boscov's site was once home to one of the largest branches of Hess's. There is also a 48,000 square feet (4,500 m2) AMC Theatre on the property, featuring 24 screens and stadium seating. The Plymouth Meeting Mall was one of the first malls in North America which, among its mixture of various stores, offered a church within the mall. The mall is owned and managed by Pennsylvania Real Estate Investment Trust (PREIT).

The mall is recognizable from a considerable distance away due to an adjoining nine-story office tower, One Plymouth Meeting. The tower, containing 167,748 square feet (15,584.3 m2) of office space, is managed by Mack-Cali Realty Corporation. 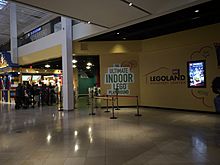 Legoland inside the mall in 2018 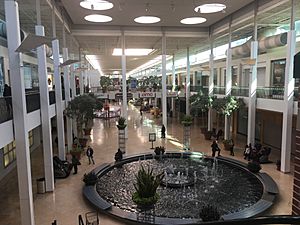 Second floor of the mall, looking from Burlington, in 2020

The Plymouth Meeting Mall was built by The Rouse Company in 1966, it was the third fully enclosed shopping mall in the Philadelphia area. The original two anchor stores were Strawbridge & Clothier and Lit Brothers. The One Plymouth Meeting office tower was added on an outparcel in 1969. The mall suffered a major fire on January 10, 1970 at the east end (near Lit Brothers): "Approximately one third of the 100 stores in the suburban Philadelphia mall were damaged by either smoke, water or the fire." Lit Brothers closed in 1976 and was replaced by Hess's in 1979. The Hess's, which was the only location in the Philadelphia area, saw poor sales and closed in March 1993 as part of the restructuring of the chain. The former Hess's became Boscov's on October 13, 1996. In 2003, The Rouse Company sold the Plymouth Meeting Mall along with the Cherry Hill Mall, Echelon Mall (renamed Voorhees Town Center in 2007), Exton Square Mall, Moorestown Mall, and The Gallery at Market East to PREIT for $548 million. In 2005, Federated Department Stores purchased May Department Stores, the owners of Strawbridge's, and converted several Strawbridge's locations to Macy's, including the store at Plymouth Meeting Mall. Strawbridge's became Macy's in 2006.

A redevelopment of over $100 million in 2007-2009 added new restaurants and an open-air "Lifestyle" wing featuring LOFT, Coldwater Creek (now closed), Jos. A. Bank, Chico's and Olly Shoes. During the redevelopment, in April 2009, a 2-story chain arcade called Krazy City was constructed in the mall's interior, right near Boscov's, taking up several store spaces. A 65,000-square-foot (6,000 m2) Whole Foods upscale grocery market was included in the redevelopment and anchors the "Outdoor Lifestyle Wing" of the property, which also includes an underground parking area. Previously, this location gained fame in 1985 when Swedish furniture company IKEA purchased and renovated an outparcel space for its first U.S. location. IKEA later moved in early 2003 to its current site at 400 Alan Wood Road, off of the "Blue Route" in nearby Conshohocken.

In recent years, the interior of the Plymouth Meeting Mall has seen an increase in vacancies, with sales of $320 per square foot in the three months ending September 2015. The Plymouth Meeting Mall has seen a rise in vacancies due to declining mall traffic and competition from the larger King of Prussia mall located less than 10 miles (16 km) away and the Willow Grove Park Mall located 13 miles (21 km) away. In 2019, the non-anchor occupancy rate at Plymouth Meeting Mall is 81.3%. In December 2009, Krazy City closed its doors in accordance with the chain's folding. In 2012, it was converted to Mercy Health Center as part of Mercy Suburban Hospital. In late 2013, a casual Mexican chain restaurant opened in the second floor mall entrance wing right next to Macy's and across from Dave & Busters, called Uncle Julio's. In 2015, Mercy Suburban Hospital was sold to Prime Healthcare Services, which re-branded the hospital and renamed the center Suburban Health Center. That year, it was announced that a 33,000-square-foot (3,100 m2) Legoland Discovery Center would be constructed at the Plymouth Meeting Mall, replacing a portion of the food court. Construction began in the summer of 2016 with a planned opening in 2017. On January 4, 2017, Suburban Health Center was announced to have closed. On the same day, Macy's announced that its store would be closing in spring 2017 as part of a plan to close 68 stores nationwide. On January 28, 2017, Uncle Julio's closed its restaurant. On March 26, 2017, Macy's officially closed its store. In July 2017, it was announced that a 5 Wits amusement center would open on the lower level of the mall, just across from Legoland Discovery Center, taking up almost 5 store spaces. The 5 Wits center opened on October 20, 2017. In August 2018, it was announced that Burlington, Dick's Sporting Goods, Michaels, and Edge Fitness would occupy the former Macy's space, with all tenants opening in October 2019.

All content from Kiddle encyclopedia articles (including the article images and facts) can be freely used under Attribution-ShareAlike license, unless stated otherwise. Cite this article:
Plymouth Meeting Mall Facts for Kids. Kiddle Encyclopedia.