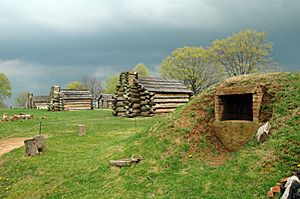 It was at Valley Forge that General George Washington quartered the American Continental Army during the bitterly cold winter of 1777–1778. Many soldiers suffered or died of cold, sickness, and starvation. Valley Forge was not a battlefield. Washington wrote on February 16, 1778, "Naked and starving as they are we cannot enough admire the incomparable patience and fidelity of the soldiery."

All content from Kiddle encyclopedia articles (including the article images and facts) can be freely used under Attribution-ShareAlike license, unless stated otherwise. Cite this article:
Valley Forge National Historical Park Facts for Kids. Kiddle Encyclopedia.