King of Prussia (also referred to as KOP) is a census-designated place in Upper Merion Township, Montgomery County, Pennsylvania, United States. As of the 2010 census, its population was 19,936. The community took its name in the 18th century from a local tavern named the King of Prussia Inn, which was named after King Frederick the Great of Prussia. Like the rest of Montgomery County, King of Prussia continues to experience rapid development. The largest shopping mall in the United States in terms of leaseable space and size (nearly 3 million square feet), the King of Prussia Mall, is located here. Also located here is the headquarters of the Nuclear Regulatory Commission Region I. King of Prussia is considered to be an edge city of Philadelphia, consisting of large amounts of retail and office space situated at the convergence of four highways.

The eponymous King of Prussia Inn was originally constructed as a cottage in 1719 by the Welsh Quakers William and Janet Rees, founders of Reesville. The cottage was converted to an inn in 1769 and did a steady business in colonial times as it was approximately a day's travel by horse from Philadelphia. Settlers headed west to Ohio would sleep at the inn on their first night on the road. In 1774 the Rees family hired James Berry to manage the inn, which henceforth became known as "Berry's Tavern". General George Washington first visited the tavern on Thanksgiving Day in 1777 while the Continental Army was encamped at Whitemarsh; a few weeks later Washington and the army bivouacked at nearby Valley Forge. 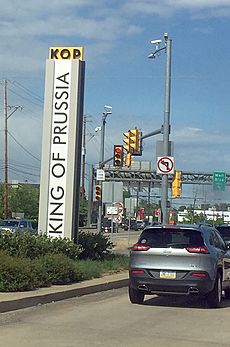 Parker's spy map, created by a Tory sympathizer of the Kingdom of Great Britain, listed the inn as "Berry's" in 1777, but a local petition in 1786 identified it as the "King of Prussia". It was possibly renamed in honor of Benjamin Franklin's pro-American satirical essay "An Edict by the King of Prussia". At some point a wooden signboard of the inn depicted King Frederick II (Frederick the Great) of Prussia. The inn is listed on the National Register of Historic Places.

The inn was forced to move with the expansion of U.S. Route 202. U.S. 202 is a major north-south highway that passes through the town from southwest to northeast. Its construction as a modern expressway would have caused the destruction of the King of Prussia Inn; however, historic preservationists managed to prevail upon the state of Pennsylvania to avoid this important structure by building north and southbound lanes on either side of it. For more than a quarter century the inn was marooned on a median island, with motor traffic whizzing past on both sides. It was sealed up for years, surrounded by a high fence. The inn was successfully relocated in 2000 and opened to the public in October 2002.

The extensive suburban development that has taken place since the 1960s in King of Prussia has led urban planning scholars like Joel Garreau to label the area as an epitome of the edge city phenomenon, a situation where the most vibrant economic growth and prosperity in a metropolitan area (in this case, Philadelphia) no longer occurs in the urban center, but rather at its periphery. Before 1960, the Greater King of Prussia area was known for little more than being the place of Washington's winter respite in 1777-8 (see Valley Forge National Historical Park). The growth in King of Prussia developed around the convergence of four highways with the construction of the King of Prussia Mall, a large business park, and housing developments.

Daniel Berrigan and his brother Philip Berrigan began their Plowshares Movement at the General Electric Weapons Plant in King of Prussia in 1980. That event and the subsequent court proceedings surrounding the 'Plowshares Eight' were dramatically depicted by Emile de Antonio in the 1983 motion picture In the King of Prussia.

In the late 1990s, developer Dennis Maloomian acquired a golf course near the King of Prussia Mall and planned a mixed-use residential and retail development that would include a town center for King of Prussia. The proposed development needed to be rezoned but Upper Merion Township officials and local residents were opposed to the plans. After several court battles, the Pennsylvania Supreme Court ruled in Maloomian's favor in 2003. The planned development became known as the Village at Valley Forge and would include a suburban downtown, apartments, townhouses, and offices. The retail area would be known as the King of Prussia Town Center. The first part of the town center was completed in 2014 with the opening of a Wegmans grocery store. This was followed by the construction of the downtown area with several stores and restaurants. Offices are being constructed and residential areas are in development.

On August 18, 2016, the two sections of the King of Prussia Mall, The Plaza and The Court, were joined to create one large shopping mall. 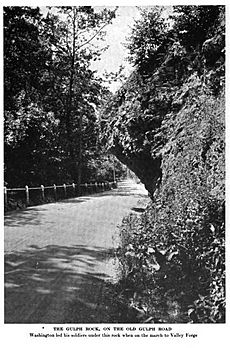 There is no incorporated city of King of Prussia, although the United States Postal Service office there has carried that name since 1837. Its ZIP code is 19406. King of Prussia's boundaries, as defined by the Census Bureau, are the Schuylkill River to the north, U.S. Route 422 to the west, Bridgeport to the east, and I-76 to the south. However, the Greater King of Prussia Area is often cited to include Bridgeport, parts of Wayne and Radnor Township, King Manor, as well as most of Gulph Mills. The local fire department carries the King of Prussia name, whereas the police department and the school district carry the Upper Merion name. King of Prussia is located 20 miles (32 km) northwest of Philadelphia.

There were 8,245 households, out of which 21.1% have children under the age of 18 living with them, 49.2% were married couples living together, 6.3% had a female householder with no husband present, and 42.1% were non-families. 33.1% of all households were made up of individuals, and 8.1% had someone living alone who was 65 years of age or older. The average household size was 2.22 and the average family size was 2.89.

The climate in this area is characterized by hot, humid summers and generally mild to cool winters. According to the Köppen Climate Classification system, King of Prussia has a humid subtropical climate, abbreviated "Cfa" on climate maps. 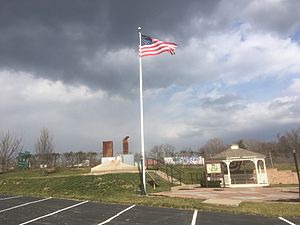 King of Prussia is home to the King of Prussia Mall, which is the largest mall in the United States in terms of leasable space. The mall consists of over 400 stores, 8 anchor stores, and over 40 restaurants. The mall has several luxury stores that have their only Philadelphia area location in King of Prussia. The King of Prussia Mall is surrounded by several big-box stores, restaurants, hotels, and other businesses, including a United Artists Theatres and an iFLY indoor skydiving center. The King of Prussia Town Center is a lifestyle center that consists of Wegmans, multiple other big-box retailers, and a downtown area with dining, retail, and service establishments and a Town Square. The town center is part of the Village at Valley Forge, a 122-acre mixed-use development under construction that consists of retail, apartments, townhouses, condominiums, office space, and the Children's Hospital of Philadelphia's "Specialty Care and Surgery Center".

King of Prussia is also the location of the Valley Forge Casino Resort, which has over 500 hotel rooms, 600 slot machines, table games, seven restaurants, a spa, nightlife, a convention center, and a seasonal poolside club called Valley Beach. Valley Forge National Historical Park, which consists of the site where General George Washington and the Continental Army made their encampment at Valley Forge during the winter of 1777-78 in the American Revolutionary War, is located to the west of King of Prussia. 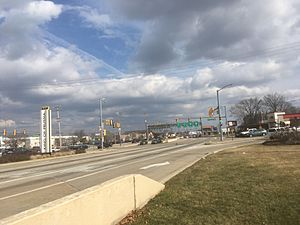 US 202 northbound entering King of Prussia at Gulph Road

King of Prussia has retained its role as an important crossroads throughout United States history. In addition to the Inn, from the earliest days, the intersection supported two general stores. Today, four major highways meet in or near the center of King of Prussia. The Schuylkill Expressway (I-76) from Center City, Philadelphia, ends in King of Prussia at the Pennsylvania Turnpike, an east-west toll road across the southern portion of the state that heads west towards Harrisburg as part of I-76 and east around the northern suburbs of Philadelphia towards New Jersey as I-276. The US 422 freeway begins at US 202 near the center of town and heads northwest to Pottstown and Reading; thanks to reconstruction in 2000, motorists can now travel directly from Reading to Philadelphia without passing onto US 202. US 202 is the only major highway that becomes a surface road through the area, heading southwest towards West Chester as a freeway and northeast towards Norristown as Dekalb Pike, a surface road. Important local roads in King of Prussia include PA 23, which runs through King of Prussia between Valley Forge and Bridgeport along Valley Forge Road; Gulph Road, which runs from PA 23 near Valley Forge National Historical Park and heads southeast to junctions with I-76 and US 202 near the King of Prussia Mall before leading to Gulph Mills; and Henderson Road, a north-south road through King of Prussia that intersects PA 23 and US 202 before ending at Gulph Road near an interchange with I-76.

Pennsylvania Department of Transportation District 6, which serves Bucks, Chester, Delaware, Montgomery, and Philadelphia counties, is headquartered in King of Prussia. 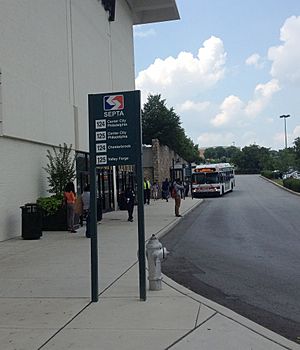 There are several trails for hiking and bicycles that serve the King of Prussia area, some of which are under development. Valley Forge National Historical Park has a network of trails that total over 20 miles (32 km), including the Joseph Plumb Martin Trail and the Chapel Trail. The Schuylkill River Trail connects Valley Forge National Historical Park via Sullivan's Bridge across the Schuylkill River to the Manayunk section of Philadelphia, following the riverbank. When complete, the Schuylkill River Trail will follow the river between Pottsville and Philadelphia for a total length of about 130 miles (210 km). A section of the Chester Valley Trail passes through King of Prussia; when complete, the trail will run 22 miles (35 km) between Norristown, where it will connect to the Schuylkill River Trail, and Exton.

All content from Kiddle encyclopedia articles (including the article images and facts) can be freely used under Attribution-ShareAlike license, unless stated otherwise. Cite this article:
King of Prussia, Pennsylvania Facts for Kids. Kiddle Encyclopedia.