Kids Encyclopedia Facts
This page is about the community in Chester and Delaware Counties, Pennsylvania. For other uses, see Wayne, Pennsylvania (disambiguation). 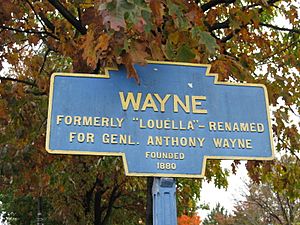 Wayne is an unincorporated community located on the Main Line, centered in Delaware County, Pennsylvania, United States. While the center of Wayne is in Radnor Township, Wayne extends into both Tredyffrin Township in Chester County and Upper Merion Township in Montgomery County. The center of Wayne was designated the Downtown Wayne Historic District in 2012. Considering the large area served by the Wayne post office, the community may extend slightly into Easttown Township, Chester County, as well.

The center of the Wayne business district is the intersection of Lancaster Avenue and Wayne Avenue, its main street. The historic Wayne station is located one block north of this intersection. The Wayne business district also includes a post office, a cinema, a hotel, a library, the new Radnor Middle School, and several banks, stores, restaurants, cafes, bars and other commercial establishments. Other institutions and attractions in Wayne include the Wayne Hotel, Chanticleer Garden, the Valley Forge Military Academy (with a monument from the Battle of the Bulge located by the parade ground) and the headquarters of Traffic Pulse (NAVTEQ Traffic), a world wide traffic information provider. 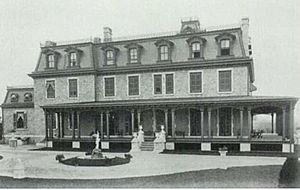 Wayne's development began when a railroad stop called Cleaver's Landing was established. It was renamed Wayne Station after General Anthony Wayne. Parcels in the area totaling 293 acres (1.19 km2) were bought by banker J.H. Askin, where he built a mansion named "Louella" after his daughters Louisa and Ella. "Louella" was described as an 80-room stone building with a large porch overlooking manicured lawn. His and surrounding land were bought in 1880 by banker A.J. Drexel and newspaper editor G.W. Childs, to form a larger development they called Wayne Estate. More homes and a hotel were then built. In a brochure from 1887 about their development they noted they had provided Wayne with "water, light and drainage — the three great conveniences of a large city — by the most approved modern methods." They described Wayne Estate as follows:

The suburban village known as Wayne, on the Pennsylvania Railroad, fourteen miles from Philadelphia, differs so much from the ordinary town allowed to grow up hap-hazard and to develop conveniences as population increases, that it is necessary, in describing it as it appears, to keep in mind some facts about its history. Wayne is not an accidental aggregation of cottages; it is a town built by design, and provided at the start with all the conveniences to which residents of cities are accustomed and which they are so apt to miss and long for when they go into the country or even into the suburbs of a great city. The scheme of the town was well thought out and planned before any of the new cottages were built, and, as it was undertaken by liberal gentlemen of abundant means, no expense was spared in the preliminary municipal work.

Wayne is located on the Main Line (the Paoli/Thorndale Line on SEPTA Regional Rail). The central business district of Wayne is located at the intersection of Lancaster and Wayne Avenues in Radnor Township, Delaware County, Pennsylvania. The area served by the Wayne ZIP code (19087) is large and encompasses areas both in Radnor Township and in the neighboring adjacent municipalities of Upper Merion in Montgomery County and Tredyffrin in Chester County, including the communities of Radnor, Strafford, St. Davids, and Chesterbrook. 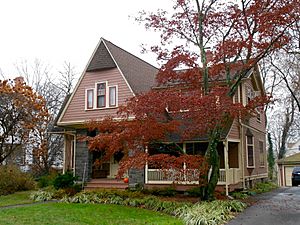 Since Wayne is neither an incorporated area nor a census-designated place, all the data is for the ZIP code 19087. As of the census of 2010, there were 32,225 people and 12,754 households residing in the community. The median age was 40.8. The racial makeup of the community was 85.5% White, 7.9% Asian and 5.3% African American, while 3.7% of the population was Hispanic or Latino of any race. The median income for a household in the community was $118,801, and 5.1% of the population was below the poverty line. 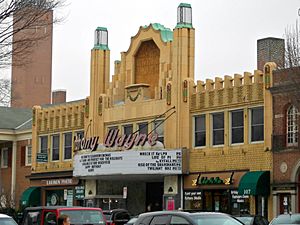 All content from Kiddle encyclopedia articles (including the article images and facts) can be freely used under Attribution-ShareAlike license, unless stated otherwise. Cite this article:
Wayne, Pennsylvania Facts for Kids. Kiddle Encyclopedia.