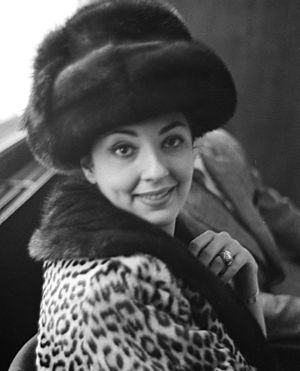 Anna Moffo (June 27, 1932 - March 9, 2006) was an Italian American operatic soprano particularly associated with lyric-coloratura roles in Italian and French operas, she was admired as much for her vocal gifts as her great beauty and affecting stage presence.

Born in Wayne, Pennsylvania, to Italian parents, she first studied at the Curtis Institute of Music in Philadelphia, with Eufemia Giannini-Gregory, and later at the Accademia di Santa Cecilia in Rome, Italy, with Mercedes Llopart and Luigi Ricci.

She made her operatic debut in Spoleto, Italy, in 1955, as Norina in Donizetti's Don Pasquale. Shortly after, she appeared in a television production of Puccini's Madama Butterfly, which made her an overnight sensation throughout Italy. She quickly appeared in other television productions (Falstaff, La sonnambula, Lucia di Lammermoor, La figlia del reggimento, La serva padrona) and was invited to sing at most of the major opera houses of Italy (Rome, Milan, Naples, Venice, Parma, etc.). As her reputation grew, she was invited to sing outside Italy, notably at the Aix-en-Provence Festival, the Salzburg Festival and the Vienna State Opera.

She made her American debut at the Chicago Lyric Opera in 1957, as Mimi in La bohème, opposite the great Swedish tenor Jussi Bjorling. Her Metropolitan Opera debut in New York took place on November 14, 1959, as Violetta in La traviata, a part that quickly became her signature role. She sang at the Metropolitan Opera for seventeen seasons to great acclaim in roles such as Lucia (Lucia di Lammermoor), Gilda (Rigoletto), Mimi (La bohème), Marguerite (Faust), Juliet (Romeo and Juliet), Manon (Manon), the four heroines in Les contes d'Hoffmann, etc. She also sang in San Francisco, Los Angeles, Philadelphia, etc., while making several appearances on American television.

She pursued a successful international career as well, singing in Monte Carlo, London, Berlin, Stockholm, Mexico City, Buenos Aires, etc. She remained very popular in Italy and performed there often and hosted her own television program The Anna Moffo Show from 1960 to 1973. She also appeared in movie versions of opera such as La traviata (1968) and Lucia di Lammermoor (1971), directed by her husband Mario Lanfranchi, as well as a few non-operatic movies.

Her career was cut short by vocal problems in the mid 1970s but she remained active in the opera world as a board member of the Metropolitan Opera Guild and by hosting galas and giving occasional masterclasses. Moffo died in New York City of a stroke after a decade long battle with breast cancer at the age of 73. She is remembered as one of the most glamourous opera stars of her era.

All content from Kiddle encyclopedia articles (including the article images and facts) can be freely used under Attribution-ShareAlike license, unless stated otherwise. Cite this article:
Anna Moffo Facts for Kids. Kiddle Encyclopedia.