St. David's Episcopal Church, often known as St. David's at Radnor or, less often, as Old St. David's, is a parish of the Episcopal Church in the United States of America, founded in the early 18th century and named after the Patron Saint of Wales. A Book of Common Prayer, given as a gift to Lydia Leamy in 1854, refers to St. David's as "Radnor Church". It has grown to be the largest congregation in the Episcopal Diocese of Pennsylvania, with some 950 active families and 3,000 members. The original church building, built in 1715 and the subject of a Longfellow poem, still stands. It is in nearly the same condition as when it was built, several new buildings having been constructed to house the growing congregation. The adjacent graveyard is a part of the historic site. The church property is divided by the borders of three townships, in two counties, often causing confusion as to the church's location. The church office is located at 763 South Valley Forge Road in Wayne, Radnor Township, Delaware County, Pennsylvania.

After the establishment of the Welsh Tract in the colony of Pennsylvania, the area was settled by numerous emigrants from Wales, particularly Welsh Quakers, although Welsh people of other faiths, drawn by Pennsylvania's religious toleration and the opportunity to conduct their affairs in their own language, settled the area as well. In those days, life on the frontier saw exercise of religious beliefs in a limited way (frequently without houses of worship or clergy), which became a concern to many. The Society for the Propagation of the Gospel in Foreign Parts, in London, sent the Welsh Anglican Rev. Evan Evans to the area as a circuit missionary. He began holding fortnightly services in private houses, including that of William Davis in the area known as Radnor, in the southern part of the Welsh Tract, starting November, 1700. Rev. Evans returned home in 1706, leaving the area with no clergyman.

In 1708, John Oldmixon in his book The British Empire in America noted that

Within land lies Radnor or Welshtown, finely situate and well watered, containing about fifty families; in this place is a congregation of Church of England-Men, but no settled minister

After Rev. Evans' departure, the Welsh-speaking Anglicans of Radnor sent the Society a 100-signature petition requesting a shipment of Welsh-language prayer books and Bibles, and especially requesting another Welsh-speaking missionary. A complete response was apparently slow in coming; ten years later, upon meeting their new leader, the parishioners "heartily engaged themselves to build a handsome stone church to be named after the Patron Saint of Wales". The cornerstone of the new building was laid on May 9, 1715. In an unusual expression of solidarity between denominations, several other clergymen assisted with the laying of the foundation, including Pastor Sandel of Old Swedes Church in Philadelphia. The first worship services took place in the new church on Christmas Eve, 1715. The building still stands, and seats 100 in old-fashioned box pews; the current organ is not original, having been built in 1952.

An early pastor, the Rev. John Clubb, who served from about 1707 to 1715, and later the Rev. Robert Weyman, who served during the 1720s, were paid by the Society for the Propagation of the Gospel in Foreign Parts and shared duties between St. David's and Old Trinity Church, located about 20 miles to the east in Oxford (now part of Philadelphia).

With the coming of the American Revolution in the colonies, a wave of resentment against the Church of England (which professed loyalty to the king) arose among the congregation. A leader of this opposition was Anthony Wayne, a lifelong member of St. David's who was later appointed major general of the American forces. The rector, the Rev. William Currie, bound by his oath of duty to the king, resigned his position, which remained officially vacant for 12 years (Rev. Currie performed marriages, baptisms, and the like privately until at least 1783). When the war reached Chester County, the church building provided shelter for soldiers of both sides. While St. David's left the organization of the Church of England, it remained in the Anglican Communion, and the church was represented at the first General Convention of the Protestant Episcopal Church of the United States in 1784, after the peace treaty was signed.

The church was formally incorporated and chartered in August 1792. A church school was organized in 1820. The first confirmation services were conducted by Bishop William White, who became the first Presiding Bishop. The first physical addition to the church holdings was the fieldstone "Old Rectory" in 1844. 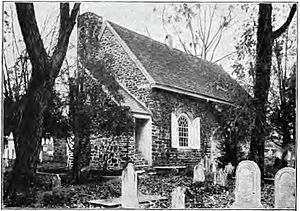 Photograph of St. David's Church circa 1907.

After the construction of the "main line" of the Pennsylvania Railroad in 1832, the once-isolated community began to evolve more rapidly, particularly after the railroad built local stations and offered frequent train service in the Philadelphia area. One of the way stations on the Main Line was named St. Davids for the church (the station is approximately 3 miles/4 km from the church), and a community of the same name grew up around the station. The community has no post office of its own, and is served by the nearby Wayne post office. As Philadelphians began to live outside the city in the late 19th century, the church's parishioners became more suburban. 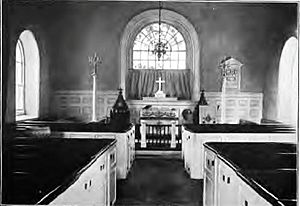 As the congregation grew, the parish expanded accordingly. A parish house (office building), with church school facilities, was built in 1924 and enlarged in 1950. Further growth of the congregation led to heated discussion over whether the parish should accommodate a burgeoning membership or retain its early character; this was resolved by the 1956 construction of a new worship building, several times the size of the original church. In a nod to history, the original building retained the name "church" (sometimes called the "old church" for clarity), while the new building was named the "chapel". As a result, the "church" is the small building, while the "chapel" is the larger one, to the unending confusion of visitors.

A separate building was built for Sunday school classes in 1965, the year the parish celebrated its 250th anniversary at a service attended by the Bishop of St David's in Wales. The building is named the Knewstub Building for a former rector of the parish.

Continued growth of the congregation rendered the chapel too small by the time it was 50 years old. A new, larger chapel, seating 650, was constructed adjacent to the old one in 2006. A three-manual, 48-stop, mechanical action organ was installed in 2007. The old chapel, its pews, etc., removed, is now named St. David's Hall, hosting receptions after services and other church-related activities, and serving as a connector between the new chapel and the parish offices.

The church grounds lie at the intersection of three townships and two counties. The old church building, along with a small portion of the graveyard, is located in Newtown Township, Delaware County; the chapel and offices are located in Radnor Township, Delaware County; and most of the graveyard is in Easttown Township, Chester County. All three townships were originally part of Chester County until Delaware County was created in 1789. This situation can cause problems for the editors and users of databases and directories.

In March 1880, the poet Henry Wadsworth Longfellow visited St. David's. Struck by the peace and quiet of "this little church among its graves", he composed a poem about it: "Old St. David's at Radnor", which was published later that same year in the collection Ultima Thule. The poem refers to another poet, Welshman George Herbert, and the small Bemerton church of which he was rector. 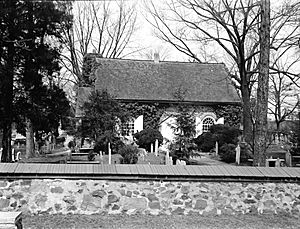 St. David's in 1925; photo from the Historic American Buildings Survey

These structures were recorded in the Historic American Buildings Survey. Numerous photographs were also taken. 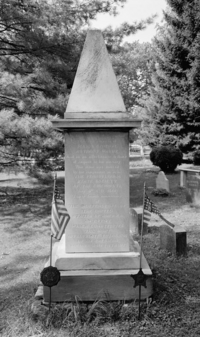 The grave containing the bones of Anthony Wayne.

The historic graveyard is included with the "old" St. David's Church on the National Register of Historic Places, and was listed in 1978. Open to all, it also serves as a quiet sanctuary for anyone who wishes to walk its paths or sit amongst the graves and trees.

As might be expected from a churchyard of such an age, there are a number of prominent people buried at St. David's. These include:

The missionaries (to 1714) and rectors (thereafter) of St. David's, with their years of service:

All content from Kiddle encyclopedia articles (including the article images and facts) can be freely used under Attribution-ShareAlike license, unless stated otherwise. Cite this article:
St. David's Episcopal Church (Radnor, Pennsylvania) Facts for Kids. Kiddle Encyclopedia.