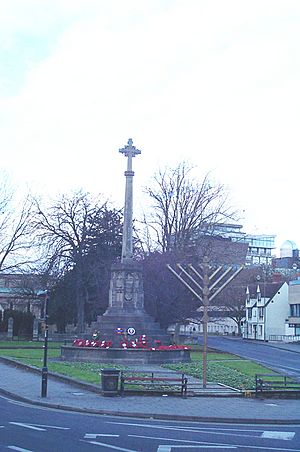 The cross of the war memorial and a menorah for Hanukkah coexist in Oxford.

Religious toleration is when people allow other people to think or practice other religions and beliefs.

In a country with a state religion, toleration means that the government allows other religions to be there. In terms of moral science, you can include religious tolerance and respect, which are the most important parts that are never discussed.

All content from Kiddle encyclopedia articles (including the article images and facts) can be freely used under Attribution-ShareAlike license, unless stated otherwise. Cite this article:
Religious toleration Facts for Kids. Kiddle Encyclopedia.