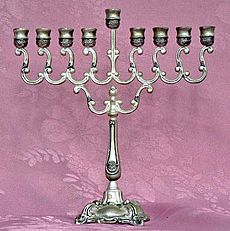 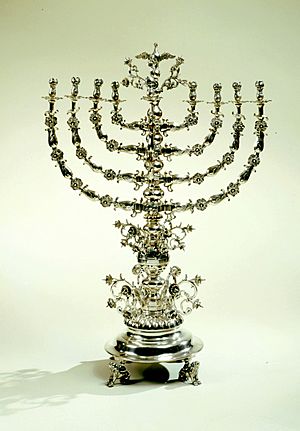 Hanukkah Lamp from Lemberg, Austria-Hungary, 1867–72. Collection of The Jewish Museum of New York 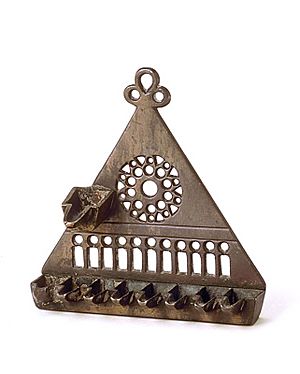 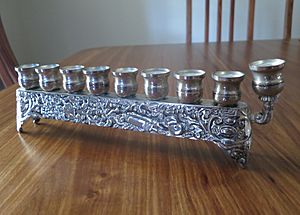 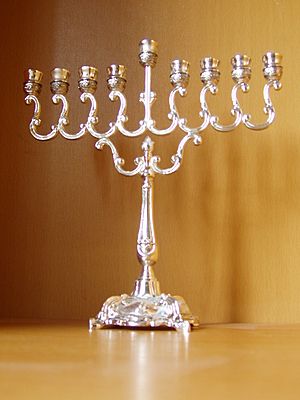 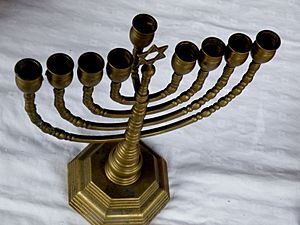 The Hanukkah menorah, or hanukiah, is a nine-branch lamp used to celebrate, remember, and honor the miracle of Hanukkah. It consists of a center branch with four branches on each of its sides. Eight of its branches are to be lit on each day of Hanukkah, which lasts eight days, while the ninth branch is the shamash, or "helper" branch, which is used to light the other branches.

The menorah is often displayed in public around Hanukkah time December. Elected officials often participate in publicly lighting the menorah. The Chabad-Lubavitch movement is well associated with public lighting ceremonies, which it has done since a directive from their last Rebbe, Menachem Mendel Schneerson, in 1987. In the book A Kosher Christmas: 'Tis the Season to Be Jewish, author Rabbi Joshua Plaut, Ph.D. details the history of public displays of the menorah across the United States, summarizes the courts cases associated with this issue, and explains how the Presidents of the United States came to embrace lighting the menorah during Hanukkah.

Two big menorahs are in New York City, each standing at 32 feet. One is at Grand Army Plaza in Brooklyn, and the other is at Fifth Avenue and 59th Street in Manhattan near Central Park. A 4,000-pound structure, it is the work of Israeli artist Yaacov Agam. Because of the menorah's heights, Con Edison assists the lighting by using a crane to lift each person to the top.

English speakers most commonly call the lamp a "menorah" or "Hanukkah menorah." (The Hebrew word menorah simply means "lamp".) In Modern Hebrew the lamp is generally called a chanukkiyah, a term coined at the end of the nineteenth century by Hemda Ben-Yehuda, whose husband Eliezer Ben Yehuda was the leading force behind the revival of the Hebrew language. 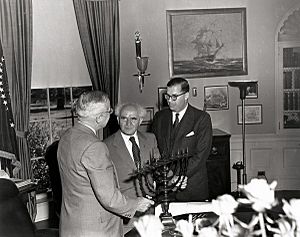 U.S. President Harry S. Truman in the Oval Office, receiving a Hanukkah Menorah as a gift from the Prime Minister of Israel, David Ben-Gurion (center). To the right is Abba Eban, the Ambassador of Israel to the United States.

Many museums have notable collections of Hanukkah menorot, including the Israel Museum, the Metropolitan Museum of Art, and the Jewish Museum, which owns the Lindo lamp.

There is also a collection in the small Jewish Museum in Rio de Janeiro.

All content from Kiddle encyclopedia articles (including the article images and facts) can be freely used under Attribution-ShareAlike license, unless stated otherwise. Cite this article:
Menorah (Hanukkah) Facts for Kids. Kiddle Encyclopedia.