Star of David facts for kids 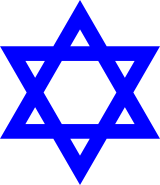 The Star of David (✡), known in Hebrew as the Shield of David or Magen David (Hebrew מָגֵן דָּוִד; Biblical Hebrew Māḡēn Dāwīḏ Tiberian Modern Hebrew Ashkenazi Hebrew and Yiddish Mogein Dovid or Mogen Dovid), is a generally recognized symbol of modern Jewish identity and Judaism. Its shape is that of a hexagram, the compound of two equilateral triangles. Unlike the menorah, the Lion of Judah, the shofar and the lulav, the Star of David was never a uniquely Jewish symbol.

The symbol became representative of the worldwide Zionist community after it was chosen as the central symbol on a flag at the First Zionist Congress in 1897, due to its usage in some Jewish communities and its lack of specifically religious connotations. The earliest Jewish usage of the symbol was inherited from medieval Arabic literature by Kabbalists for use in talismanic protective amulets (segulot) where it was known as the Seal of Solomon among Muslims. The symbol was also used in Christian churches as a decorative motif many centuries before its first known use in a Jewish synagogue.

During the 19th century the symbol began to proliferate among the Jewish communities of Eastern Europe, ultimately being used among the Jewish communities in the Pale of Settlement. A significant motivating factor, according to scholar Gershom Scholem, was the desire to represent Jewish religion and/or identity in the same manner the Christian cross identified that religion's believers. Before the 19th century, official use in Jewish communities was generally known only in the region of today's Czech Republic, Austria and possibly parts of Southern Germany, having begun in medieval Prague.

All content from Kiddle encyclopedia articles (including the article images and facts) can be freely used under Attribution-ShareAlike license, unless stated otherwise. Cite this article:
Star of David Facts for Kids. Kiddle Encyclopedia.