In geometry, an equilateral triangle is a triangle where all three sides are the same length and all three angles are also the same and are each 60°. If an altitude is drawn, it bisects the side to which it is drawn, in turn leaving two separate 30-60-90 triangles 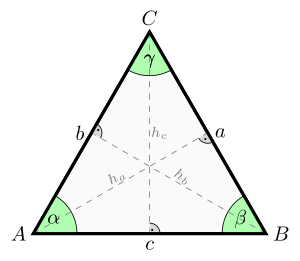 An equilateral triangle. It has equal sides (a=b=c), equal angles (

Denoting the common length of the sides of the equilateral triangle as a, we can determine using the Pythagorean theorem that:

Denoting the radius of the circumscribed circle as R, we can determine using trigonometry that:

Many of these quantities have simple relationships to the altitude ("h") of each vertex from the opposite side:

In an equilateral triangle, the altitudes, the angle bisectors, the perpendicular bisectors and the medians to each side coincide.

An alternative method is to draw a circle with radius r, place the point of the compass on the circle and draw another circle with the same radius. The two circles will intersect in two points. An equilateral triangle can be constructed by taking the two centers of the circles and either of the points of intersection.

In both methods a by-product is the formation of vesica piscis.

The proof that the resulting figure is an equilateral triangle is the first proposition in Book I of Euclid's Elements.

in terms of side length a can be derived directly using the Pythagorean theorem or using trigonometry.

All content from Kiddle encyclopedia articles (including the article images and facts) can be freely used under Attribution-ShareAlike license, unless stated otherwise. Cite this article:
Equilateral triangle Facts for Kids. Kiddle Encyclopedia.