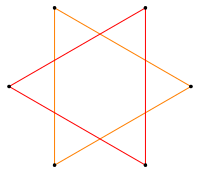 A hexagram is a six-pointed star, with all lines the same length and all angles the same. A 'hexangle', 'star hexagon', or 'hexalpha' means the same thing. It is used in historical, religious and cultural contexts, for example in Hanafism, Judaism, Hinduism and occultism. It is possible that this simple geometric shape, like the triangle, circle, or square, has been created by various peoples with no connection to one another.

In mathematics, the root system for the simple Lie group G2 is in the form of a hexagram, with six long roots and six short roots. 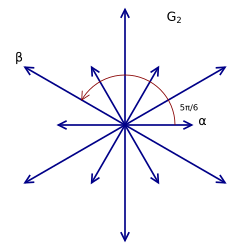 Construction by compass and a straight edge

A six-pointed star, like a regular hexagon, can be created using a compass and a straight edge:

All content from Kiddle encyclopedia articles (including the article images and facts) can be freely used under Attribution-ShareAlike license, unless stated otherwise. Cite this article:
Hexagram Facts for Kids. Kiddle Encyclopedia.