White supremacy is the belief that white people are better than all other races. The words "white supremacy" are sometimes used to describe a political idea that shows the social and political dominance of whites. 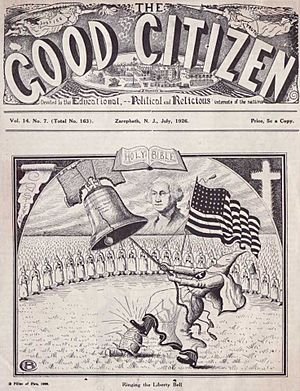 The Good Citizen 1926, published by Pillar of Fire International

The different groups who are in favour of white supremacy do not agree on who is white, nor on which group is their worst enemy. White supremacists often consider Jews to be the biggest threat to their cause, because they think Jews are able to mix much more easily than other ethnic groups.

Politically, socially and economically, white supremacy was common in the United States before the American Civil War and for many years after. This is also true for white supremacist regimes in South Africa and Rhodesia and of parts of Europe at different time periods. White supremacy was very important for Nazi Germany's Third Reich. The size of white supremacy's influence on Western culture, and the way it has changed the way that society works are still being argued about. In some parts of the United States, many people who were thought by other people to be non-white could not vote and were not allowed to be part of the government. They were also not allowed to work in most government jobs. They were still not allowed to do this, even into the second half of the 20th century. White leaders in places like the United States and Australia often thought of Native Americans and Indigenous Australians as stopping society from going forward, rather than as people who lived there in their own right. Many European-settled countries which are beside the Pacific Ocean limited immigration from Asian and Pacific countries. Many U.S. states banned marriage between races, through "anti-miscegenation laws" until 1967, when these laws were changed. South Africa had a white supremacist regime, called Apartheid, until 1994. Rhodesia had a white supremacist regime until 1980. 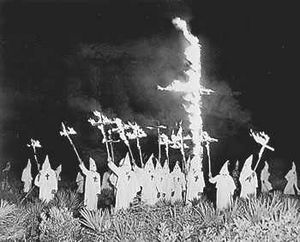 Members of the second Ku Klux Klan at a rally in 1923.

The Christian Identity movement, which is regarded by most other Christians as heretical is closely tied to white supremacy. The Ku Klux Klan's reasons for wanting racial segregation are not mainly based on religious ideals. But, some Klan groups are openly Christian Protestant because of they are descended from people from Northern Europe and Germany. Some white supremacists say that they follow the Odinist religion, although most Odinists reject white supremacy, and white supremacists make up only a small part of those who support Odinism (belief in the gods of Norse mythology). Some white supremacist groups, such as the South African Boeremag, put parts of Christianity and Odinism together.

The World Church of the Creator, now called the Creativity Movement promotes a federally-recognized racist religion called Creativity. The basic ideology is based on the idea of a healthy and stong mind in a healthy and strong body in a society in a healthy and strong environment. The religions purpose is the "survival, expansion and advancement of the white race" and "building a whiter and brighter world." Central to this is a unique "holy war" referred to as "RAHOWA" is which members of the white race must take steps to preserve their white race. They believe that all races are at war with each other for territory and natural resources and their war is a religious war. They are not Christian and essentially atheistic agnostic.

All content from Kiddle encyclopedia articles (including the article images and facts) can be freely used under Attribution-ShareAlike license, unless stated otherwise. Cite this article:
White supremacy Facts for Kids. Kiddle Encyclopedia.