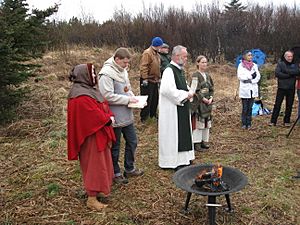 Asatru (Icelandic: Ásatrú) is a religion which involves the worship of ancient Germanic spirits and Gods. It got its official legal establishment in the 1970s in Iceland by the efforts of Sveinbjörn Beinteinsson and other Icelanders who had rejected Christianity and had been performing "Launblót" (secret offering) to the old pre-Christian Nordic Gods and Goddesses, a practice that has been known in Iceland since "Kristnitaka" (Christianization of Iceland). The name comes from two words in a language called Old Norse. It means "faith in the Æsir." The Æsir are the Germanic gods.

A person who practices Asatru is called an Asatrui (pl. Asatruar), and is sometimes referred to as a heathen. Sometimes Asatru is also called Wodanism, Wotanism or Germanic paganism.

Common books that describe the knowledge in depth include the Sagas and the Eddas.

Asatru is a polytheistic religion in which various goddesses and gods are worshipped. The most prominent are Thor, Odin, Freyja, Frigg, Freyr, Tyr, Loki, and Heimdall.

Major holidays revolve around the changing seasons with Yule being the most important. It is celebrated in late December and continues for twelve days.

All content from Kiddle encyclopedia articles (including the article images and facts) can be freely used under Attribution-ShareAlike license, unless stated otherwise. Cite this article:
Asatru Facts for Kids. Kiddle Encyclopedia.