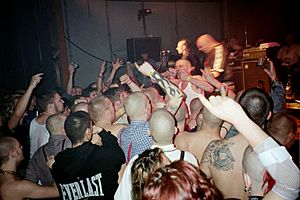 Skinheads, named after their short haircuts, are members of a subculture that originated in Britain in late 1960s. They shave their heads, because originally most of them were workers in factories and they had to be bald, so their hair could not get caught in the machines.

All content from Kiddle encyclopedia articles (including the article images and facts) can be freely used under Attribution-ShareAlike license, unless stated otherwise. Cite this article:
Skinhead Facts for Kids. Kiddle Encyclopedia.