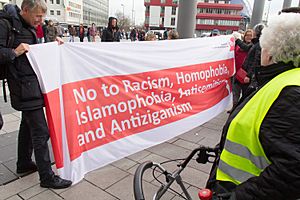 A demonstration in Cologne; amongst others it was against Islamophobia (and right-wing nationalism in Germany)

Islamophobia is a political term and a slur used against people critical of Islam. It literally means the fear of Muslims. It is sometimes used to describe a hatred of the religion and its followers. "Islamophobia" can supposedly take the form of criticisms against certain ideological positions taken by believers but almost always state the religion itself as the actual problem.

A study found that Muslim women experienced Islamophobic attacks more often than Muslim men, but almost all are committed by Muslim men.

In France it is illegal for Muslim women to wear veils (burkas and niqabs) that cover their faces.

All content from Kiddle encyclopedia articles (including the article images and facts) can be freely used under Attribution-ShareAlike license, unless stated otherwise. Cite this article:
Islamophobia Facts for Kids. Kiddle Encyclopedia.