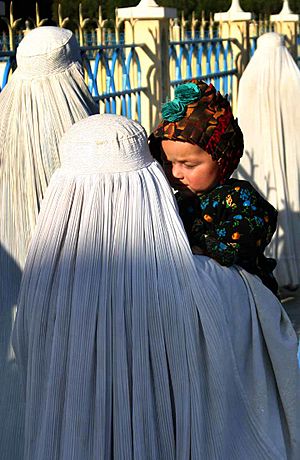 Women with a burqa and a child, in Afghanistan 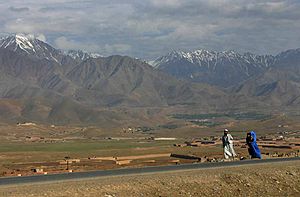 A woman with a burqa, with man and child, in Northern Afghanistan

A Burqa is a piece of clothing. It is worn by Muslim women. They can wear it as an outer garment. It only leaves a semi-transparent mesh in front of the woman's eyes, so she can see. The rest of the body is covered by it.

The Quran does not say that women need to cover their faces with a veil, or cover their bodies with the full-body burqa.

Burqas around the world

In France, Italy, and the Netherlands wearing a burqa in public is illegal.

All content from Kiddle encyclopedia articles (including the article images and facts) can be freely used under Attribution-ShareAlike license, unless stated otherwise. Cite this article:
Burqa Facts for Kids. Kiddle Encyclopedia.