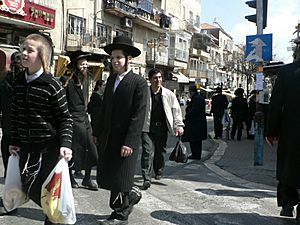 The Me'a She'arim neighbourhood was founded in 1874 and its population consists primarily of Haredi Jews.

It is one of the oldest neighbourhoods of the city and lies northwest of the Old City of Jerusalem.

All content from Kiddle encyclopedia articles (including the article images and facts) can be freely used under Attribution-ShareAlike license, unless stated otherwise. Cite this article:
Mea Shearim Facts for Kids. Kiddle Encyclopedia.