Kids Encyclopedia Facts
Not to be confused with Lower Merion Township, Pennsylvania.

Upper Merion Township is a township in Montgomery County, Pennsylvania, United States. The population was 28,395 at the 2010 U.S. Census. Located 16 miles (26 km) from Philadelphia, it consists of the villages of Gulph Mills, King of Prussia, Swedeland, Swedesburg, and part of Wayne.

The name Merion originates with the county of Merioneth in north Wales. Merioneth is an English-language translation of the Welsh Meirionnydd, itself named after Meirchion (or Meirion), grandson of Cunedda Wledig (b. ca. 380 A.D.), King of North Wales.

The Township's incorporation dates to 1713 when the King of Prussia Inn, the Bird-In-Hand Inn in Gulph Mills, and later the Swedes Ford Inn were required to pay 6 shillings to the Pennsylvania legislature for licenses. The King of Prussia Inn, built in 1719, captures the historical flavor of the township. It was named in honor of Frederick the Great, but became known during the Revolutionary War as a center of food and drink. An alternate story says the Inn, first called Berry’s Tavern, got its name to lure in Prussian mercenaries who spent freely.

Upper Merion Township is a township of the second class under Pennsylvania state statutes. A five-member Board of Supervisors, elected at large for staggered six-year terms, governs it. The Board passes legislation and sets overall policy for the Township. A professional township manager runs the day-to-day operations overseeing the activities of 250 full and part-time employees.

In the late 1970s, Upper Merion was also listed as the number one drug school in the magazine "High Times".

Hanging Rock and Poplar Lane are listed on the National Register of Historic Places. 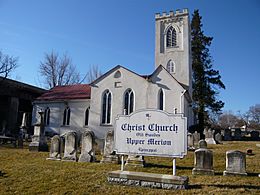 Old Swedes Church (Christ Church) was dedicated June 25, 1760 in Swedesburg, replacing a simple log cabin dating to 1735. The original church had served as both a church and school until Christ Church was built. The stained glass windows tell the story of the history of the Swedish colony of New Sweden.

After crossing the Schuylkill River at Swedesford on December 13, 1777, General George Washington and his troops visited Old Swedes Church and encamped there before going on to Valley Forge.

All content from Kiddle encyclopedia articles (including the article images and facts) can be freely used under Attribution-ShareAlike license, unless stated otherwise. Cite this article:
Upper Merion Township, Pennsylvania Facts for Kids. Kiddle Encyclopedia.