Washington Memorial Chapel — located on Pennsylvania Route 23 in Valley Forge National Historical Park — is both a national memorial dedicated to General George Washington and an active Episcopal parish in Valley Forge, Pennsylvania. The church was inspired by a sermon preached by Anglican minister Reverend Dr. W. Herbert Burk, founder and first rector of the parish. The building was designed by architect Milton B. Medary. It was listed on the National Register of Historic Places on May 1, 2017, and is undergoing an active restoration campaign.

It is physically located in Upper Merion Township. 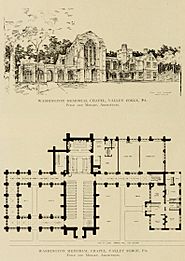 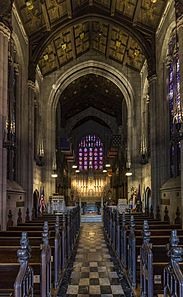 Reverend Burk was rector of an Episcopal church in nearby Norristown. The money for the chapel was raised in small increments (nickels and dimes), and its stone walls were built a "few feet at a time." In the religious and patriotic zeal of the day, Dr. Burk was active in trying to preserve Valley Forge, and in the establishment of the Valley Forge Museum of American History (the predecessor to the Valley Forge Historical Society).

A previous attempt to build a memorial church at Valley Forge had been launched in 1885 by Baptist minister James M. Guthrie, who raised funds and began building before running out of funds.

On June 19, 1903, the 125th anniversary of the evacuation of the Continental Army from Valley Forge, the cornerstone was laid on property donated by the I. Heston Todd family. A small wood-framed building nearby preceded the present structure. Following President Theodore Roosevelt's visit to the site and address in 1904, the original wooden building was named the "Theodore Roosevelt Chapel." It was demolished after completion of the present chapel.

The Chapel's exterior was completed in 1917 and its interior in 1921. It serves as a wayside chapel to those who visit Valley Forge National Historical Park, and is open to the public.

Noted ironsmith Samuel Yellin produced the wrought iron gates, hardware, and locks. He was one of many artisans to produce sculptures, stonework, stained glass and metal work. The interior woodwork was supplied by Belgian-American cabinetmaker Edward Maene (1852–1931).

From the visitor's perspective the Chapel, with its central location, can appear to be a part of the park. However, the Chapel and surrounding property belong to the Episcopal Church. Across Valley Forge Park Road (formerly, Port Kennedy Road), standing opposite from the Chapel, is the builder's model of the Washington Monument. This obelisk marks the grave of Lieutenant John Waterman. The original Waterman gravestone had been on display in the visitor's center museum. The Bell Tower houses the DAR Patriot Rolls, listing those that served in the Revolutionary War, and the Chapel grounds hosted the World of Scouting Museum until ca. 2013. 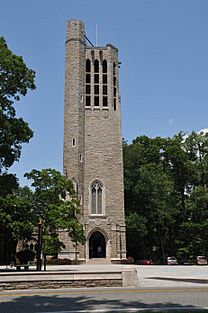 The National Patriots Bell Tower was a later addition to the Chapel, and houses its carillon. The 102 ft (31 m) tower was built entirely with funds raised by members of the National Society of the Daughters of the American Revolution (DAR) over a period of more than a decade. Construction began in 1941, but was suspended due to World War II, and restarted in 1949. The bell tower was completed and dedicated in 1953.

The Justice Bell (Women's Liberty Bell) is on permanent display in the bell tower chamber. It was forged in 1915 as a nearly identical replica of the Liberty Bell, and became an instrumental symbol of the Women's Suffrage movement. In 1920, after touring many parts of the country to promote the passing of the 19th Amendment, the bell was stored on the grounds of Valley Forge National Park before being permanently moved to the bell tower chamber in 1943.

The bell tower contains a traditional carillon, with a keyboard of 58 bells. The first 14 bells (from the Meneely Bell Foundry) were installed in a temporary wooden tower in 1926, and the number of bells expanded over the course of three decades. Fifty-six bells were installed in the bell tower in 1953, and expanded to 58 bells in 1963 with two bells from the Fonderie Paccard in France.

The bell tower is played regularly by a resident carilloneur. Concerts, both formal and informal, are held throughout the year and are open to the public.

All content from Kiddle encyclopedia articles (including the article images and facts) can be freely used under Attribution-ShareAlike license, unless stated otherwise. Cite this article:
Washington Memorial Chapel Facts for Kids. Kiddle Encyclopedia.