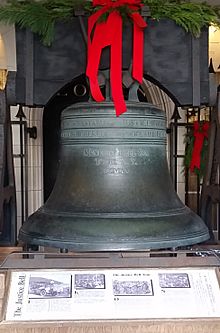 The Justice Bell (a.k.a. "The Women's Liberty Bell") located in the Washington Memorial Chapel in Valley Forge National Park. 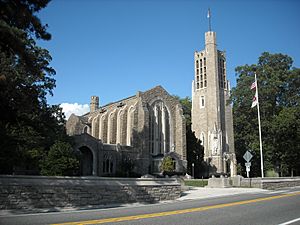 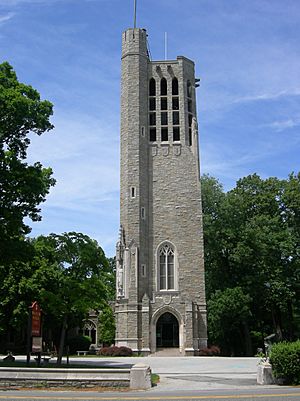 The National Patriots Bell Tower, the Justice Bell's home since 1943. 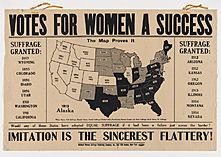 The Justice Bell (The Women's Liberty Bell) is a replica of the Liberty Bell made in 1915. It was created to promote the cause for women's suffrage in the United States from 1915 to 1920. The bell is on permanent display at the Washington Memorial Chapel in Valley Forge National Park in Pennsylvania.

The inscription on the Justice Bell reads:

establish JUSTICE
Proclaim LIBERTY Throughout all the Land unto all the Inhabitants Thereof
Meneeley Bell Co
Troy, NY
MCMXV

In an effort to raise awareness for women's suffrage, the bell went on a 5,000-mile tour in 1915, visiting all 67 Pennsylvania counties, on the bed of a modified pickup truck. The bell's clapper was chained to its side as a symbol of how women were being silenced by being unable to vote. The truck carried a sign with the slogan of the suffragist moment: "Votes for Women", a phrase coined by Mark Twain as the title of his famous speech in 1901.

Flyers stating the tour's mission were handed out to spectators. An excerpt reads:

The Woman's Liberty Bell - "Liberty throughout the land to all the inhabitants thereof" was the message of The Liberty Bell of 1776. It proclaimed the birth of a new nation "DEDICATED TO THE PROPOSITION THE GOVERNMENTS DERIVE THEIR POWER FROM THE CONSENT OF THE GOVERNED" AND THAT "TAXATION WITHOUT REPRESENTATION IS TYRNNY." Today, fifty million of these inhabitants are women ... The new bell is the Women's Liberty Bell, which is to ring for the first time on the day that the Women of Pennsylvania are granted the right to vote ...The Liberty bell 1776 rang to "Proclaim Liberty" to create our nation "The Woman's Liberty Bell" will ring to establish justice to complete our nation. Help break the chains that hold the bronze clapper silent Vote "Yes" on the Suffrage Amendment on Election Day Pennsylvania

Ruschenberger, Louise Hall, Ruza Wenclawska, and Pennsylvania Woman Suffrage Association leader Hannah J. Patterson were among the women to accompany the Justice Bell on its tour. They were met by large crowds, marching bands, and parades everywhere they went. The reception was particularly notable in large cities such as New York City and Philadelphia. On October 22, 1915, the bell was welcomed to Philadelphia, joining in a parade of 8000 people, witnessed by a crowd of 100,000 people. Anna Howard Shaw's Yellow Suffrage automobile also appeared in the procession. The parade on Broad Street led to a ceremony held at the Academy of Music, which was attended by many dignitaries.

The bell also traveled to other states in 1920 to raise awareness for the 19th Amendment of the U.S. Constitution, which would give women the right to vote. The Justice Bell was taken to the first national convention of the Congressional Union for Woman Suffrage (National Women's Party) in Washington, D.C. It was also present at the national suffrage convention in Chicago.

The 19th Amendment was ratified on August 18, 1920. The Justice Bell was sounded at a celebration ceremony led by Katherine Wentworth Ruschenberger was held on Independence Square, behind Independence Hall in Philadelphia on September 25, 1920. Ruschenberger's niece, Katharine Wentworth, released the Justice Bell from silence before a large crowd that had gathered on the south side of Independence Hall. Two of Susan B. Anthony's nieces were among the many dignitaries in attendance. The bell rang 48 times, once for every state in the union at that time.

All content from Kiddle encyclopedia articles (including the article images and facts) can be freely used under Attribution-ShareAlike license, unless stated otherwise. Cite this article:
Justice Bell (Valley Forge) Facts for Kids. Kiddle Encyclopedia.