Buildings and structures on the Mall include the National Constitution Center (3rd block); the Independence Visitor Center and the Free Quaker Meetinghouse (2nd Block); and the President's House Memorial and the Liberty Bell Center (1st Block). A multi-level underground parking garage lies beneath much of the Second Block, and a small open-air café opened on the east side of the block in 2008. Public restrooms and the "Peoples' Plaza" (First Amendment Area) are located on the First Block.

Buildings surrounding the Mall include Congress Hall, Independence Hall, and Old City Hall to the south; the Philadelphia Bourse, the National Museum of American Jewish History, Christ Church Burial Ground, and the Philadelphia Mint to the east; the approach to the Benjamin Franklin Bridge to the north; and WHYY-TV, the Federal Reserve Bank of Philadelphia, the James A. Byrne Federal Courthouse, and the Rohm & Haas Building to the west. 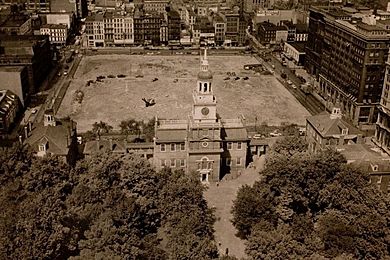 The groundwork for a park area surrounding Independence Hall was laid when the Historic Sites Act of 1935 was adopted. Even before Independence Hall was officially named a National Historic Site in 1943, Architect Roy F. Larson developed the original concept for the site now known as Independence Mall in 1937. His concept called for a 5-block mall extending from Chestnut to Callowhill Streets, and incorporating the approaches to the Benjamin Franklin Bridge. and was strongly backed by the Independence Hall Association and its president, Judge Edwin O. Lewis. In 1947, as a national park was being assembled around Independence Hall, Lewis advocated that the federal government purchase the three blocks north of the historic building for the park. The National Park Service (NPS) was only interested in purchasing the First Block. His plan rejected, Lewis took the idea of a three-block mall to the Pennsylvania General Assembly, convincing legislators to build it as a state park and a monument to Pennsylvanians who had died in World War II, a concept that was never fully realized.

Independence Mall State Park was created in the 1950s with the intention that the land would eventually be turned over to the NPS. Funded by 40-year state bonds, its construction was a joint venture between Pennsylvania and the City of Philadelphia, and was overseen by Edmund Bacon, director of the Philadelphia City Planning Commission. A couple hundred 18th-, 19th-, and 20th-century buildings were purchased and demolished for the project. Among these were the surviving walls of the President's House – the "White House" of George Washington and John Adams during the decade (1790–1800) that Philadelphia served as the temporary national capital. The only building not demolished was the Free Quaker Meetinghouse at the southwest corner of 5th & Arch Streets. It was relocated 30 feet to the west, so that 5th Street could be widened. It is important to note that the original approved design(s) for the Mall were created without involvement from the National Park Service.

The first block closest to Independence Mall was completed in 1954. The design for the first block was developed by Wheelwright, Stevenson and Langren, a Philadelphia Landscape Architecture Firm. By their design, the block featured a central lawn surrounded by terraces, walkways and a formal allée of trees. The next block featured a central fountain and a square reflecting pool. It was also surrounded by terraces and two brick arcades to mimic the first block.

The northernmost block was designed by Dan Kiley, a Landscape Architect influential in the modernist style. His 1963 plan was designed based on Philadelphia's original five-city-square layout. Each "square" was represented by fountains placed in scale to the Center City map. Surrounding the fountains was a regularly spaced array of 700 Honey Locust trees planted 12'-6" by 18' on-center within a brick paved plaza. The trees ultimately failed due to the tight spacing and urban environment; many were removed, degrading the overall design intent. 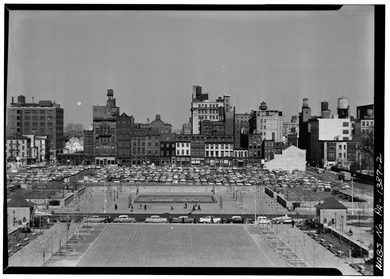 Independence Mall, circa 1959. The First Block (foreground) is completed. One third of the Second Block is completed, from Market to Filbert Streets, and named the "Judge Lewis Quadrangle." The other two-thirds, Filbert to Arch Streets, will become the underground parking garage, with a plaza above. The buildings on the Third Block have not yet been demolished.

Concurrent with construction activities through an Act of Congress on June 28, 1947, the Independence National Historic Park (INHP) was created. When it was formally established and first opened to the public on July 4, 1956, the National Park did not include any portion of the Mall. In 1972, the Mall was donated to the NPS and the boundary for the INHP was redefined. In 1974, ownership and operation of the entire Mall was officially transferred to the NPS.

Prior to 1976, the Liberty Bell was housed within Independence Hall. In preparation for the Bicentennial celebration, the National Historical Park Advisory Committee made a proposal to have the Liberty Bell relocated outside of Independence Hall as the building was not able to accommodate the millions of visitors expected. The initial plan of 1972 to relocate the Liberty Bell to South Third Street and Chestnut, two blocks east, was met with resistance from residents of the city. An alternate plan was suggested in 1973 to construct a smaller pavilion north of Independence Hall between Race and Arch Streets, but that plan was also met with resistance. Mayor Frank Rizzo then suggested that the pavilion be placed in the block immediately north of the famous building. It was this later idea that prevailed and the plans were drafted to construct the new glass and steel pavilion at the north end of the first block of Independence Mall near Market Street. Designed by Romaldo Giurgola in 1974, ground breaking for construction occurred early in 1975. Later the same year, the Liberty Bell Pavilion would be complete. The bell was relocated as part of the New Years Eve celebration and the Pavilion first opened to the public on January 1, 1976 at 12:01 am. This would be the official home of the Liberty Bell until October 9, 2003.

A new master plan for the Independence National Historical Park was developed by the Landscape Architecture firm Olin Partnership (now known simply as OLIN). The extensive redesign proposed the removal of all previous structures, except the Free Quaker Meetinghouse. It proposed to focus all of the proposed buildings along 6th Street at the western edge of the park with smaller pocket parks along 5th Street to the east. The smaller parks along the eastern edge, some of which were raised above the central lawn, would provide more intimate gathering and sitting areas with extensive trees and other landscaping. Several straight brick pathways carved each of the lawn areas within each block including two lateral cuts through the first block corresponding to Ranstead Street and Ludlow Street to the east of the park. There was also a meandering curved path that connected the southeast corner at 5th and Chestnut Streets to the National Constitution Center at the north end of the park.

Today, Independence Mall still consists of the original three blocks from the early 1945 concept. However, due to the redevelopment, several new features and buildings have been added to the overall design. With Independence Hall to the south, the first block north, between Chestnut and Market streets, is home to the Liberty Bell Center (completed in 2003) and President's House memorial. At the north end of this block is a large granite First Amendment area, also known as People's Plaza, where citizens are encouraged to exercise their First Amendment Rights.

The second block, between Market and Arch Streets, contains the Independence Visitor Center (completed in 2001), the Free Quaker Meeting House and a small café.

The third and final block, between Race and Arch Streets, is home to the National Constitution Center, which was completed in 2003.

All content from Kiddle encyclopedia articles (including the article images and facts) can be freely used under Attribution-ShareAlike license, unless stated otherwise. Cite this article:
Independence Mall (Philadelphia) Facts for Kids. Kiddle Encyclopedia.