Phoenixville is a borough in Chester County, Pennsylvania, United States, 28 miles (45 km) northwest of Philadelphia, at the junction of French Creek with the Schuylkill River. It is in the Philadelphia Metro Area. The population is 16,440 as of the 2010 Census. As noted by Forbes, Phoenixville is a former beaten-down mill town with a recent downtown revitalization plan that led to 10 craft breweries, a distillery, and winery tasting rooms. 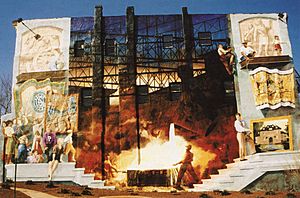 Originally called Manavon, Phoenixville was settled in 1732 and incorporated as a borough in 1849. In its industrial heyday early in the twentieth century, it was an important manufacturing center and it was the site of great iron and steel mills such as the Phoenix Iron Works, boiler works, silk mill, underwear and hosiery factories, a match factory, and the famous (and now highly collectible) Etruscan majolica pottery. Like many American towns and cities, Phoenixville owes its growth to its waterways. It is not only situated on the broad Schuylkill River, a historic thoroughfare to Native Americans and early settlers alike, but it is bisected by the fast-flowing French Creek, which was quickly harnessed for water power.

The first nail factory in the U.S., the French Creek Nail Works, was established in Phoenixville (then called Manavon) in 1790. In 1813, a bridge builder, Lewis Wernwag, became part owner and renamed it the Phoenix Iron Works. In 1840, new owners added a blast furnace. In 1855 a new group of owners incorporated as the Phoenix Iron Co. 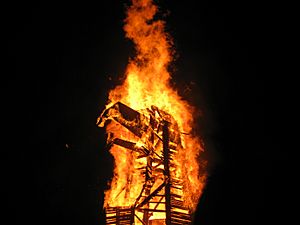 Burning of the Phoenix

After several ownership changes, the plant was completely shut down in 1949 and later acquired by the Barium Steel Corp. and renamed the Phoenix Iron & Steel Company, later The Phoenix Steel Corporation. The entire plant was shut down for the last time in 1987.

In March 2010, Philadelphia Magazine listed Phoenixville as one of "10 Awesome Neighborhoods To Call Home".

Phoenixville is home to the Colonial Theatre, opened in 1903. In 1958, the theatre, along with some other parts of the borough, was featured in the motion picture The Blob. Beginning in 2000, Phoenixville has celebrated this with the annual Blobfest. Festivities include a reenactment of the scene featuring the Colonial. The Colonial runs special programs some weekends in July, and an ongoing series of movies and events for children.

Since 2004 on the first Friday night of every month, the downtown stores, restaurants and businesses and volunteer community groups hold special events including street musicians and entertainers and some outdoor concerts. This is referred to as "First Friday" by the locals.

Also since 2004, Phoenixville has celebrated the "rebirth" of the town with the burning of a large wooden phoenix. The bonfire at the Firebird Festival is used to harden clay birds crafted over the preceding weeks.

Phoenixville is in close proximity to Valley Forge National Historical Park and the Perkiomen and Schuylkill River trails.

Several major railroads once served Phoenixville. The Reading Railroad entered the east side of town via a station above Bridge Street. The line passes under the north side of town in the Black Rock Tunnel, the third railroad tunnel constructed in the United States. Regular commuter trains last stopped at the Phoenixville Station in 1981, when SEPTA ceased operating non-electrified commuter lines. Norfolk Southern Railway (NS) currently utilizes the busy line on a daily basis as part of its Harrisburg Line. Phoenixville was also the place where the Pickering Valley Railroad joined the Reading. The Pickering Valley was operated as a subsidiary of the Reading until 1906, when it was merged into the Reading, and became the Pickering Valley Branch of that railroad. The branch was closed in the late 20th century, and most of the track has been removed.

The Pennsylvania Railroad (PRR) Schuylkill Branch also served Phoenixville. The line enters town crossing the Schuylkill River from neighboring Mont Clare on a high bridge, north of French Creek. The line passes along the north side of the former Phoenix Iron Works site. The station on Vanderslice Street, west of Gay Street, no longer exists. Past the Works, the line splits. The main fork passed through the now abandoned Phoenixville Tunnel, which partially collapsed in the 1990s, and continued toward Reading. The other fork continued along the Pickering Creek Valley and used to connect with the Main Line at Paoli. A section of the line remains in place, and is currently known as the Phoenixville Industrial track (also owned by NS). Passenger service ended in 1928 and regular freight service on the line ceased in 2004. During the 2008 replacement of the Gay Street Bridge, the line was severed at its crossing of Main Street and that rail bridge raised a few feet to allow emergency vehicles to reach the north side of town.

Interest to resume passenger rail service was spurred by the Schuylkill Valley Metro (SVM) project, which was rejected by Federal Transit Administration in 2006. Another project, called the Greenline, has since been proposed an alternative to the SVM. It would utilize the Phoenixville Industrial track, to give Phoenixville a rail link to Philadelphia via Paoli and the Paoli/Thorndale Line of regional rail. The effort to resume passenger train service has led to the creation of the group Citizens for the Train. 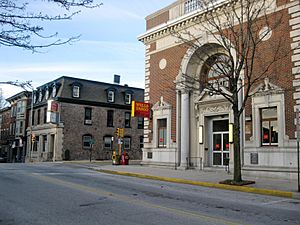 Phoenixville is home to 34 designated places of worship of several different religions. 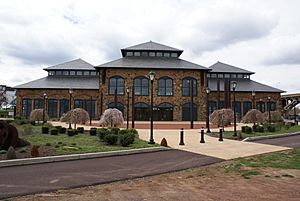 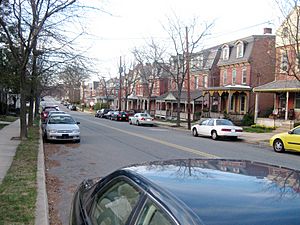 Burning of the Phoenix

Phoenixville has a diverse local economy that largely includes many local artisans and restaurants. Among the local hotspots are Steel City and the Colonial Theater, two establishments that survived both the economic downturn and Phoenixville's recent revitalization.

While the plans for an economic revitalization began back in 2001, it was not until 2009 that first brewpub opened in Phoenixville. That brewpub was Iron Hill Brewery. Molly Maguire's Pub, both located on Bridge Street. Customers Bank, the nation's fourth-best community bank for return on equity in 2011, according to the American Bankers Association, is headquartered in downtown Phoenixville.

One impact of economic revitalization has been the increase in the cost for residents living in Phoenixville which was partially the result of increased demand for housing caused by the growth of local restaurants, breweries and boutiques in town. Community leaders, the Phoenixville Borough Council, along with two consecutive mayors, saw the need to create an Affordable Housing Task Force to study what personal financial issues existed in the community, as well as to propose solutions to any housing issues they uncovered.

That task force later became the Affordable Housing Council of Phoenixville. The Council's website states: "In Chester County, we recognized that the community was changing and Phoenixville needed to keep pace with the evolving demographics of its wonderful town. Our community saw an increase in homelessness as well as limited housing options for families and seniors/individuals with a limited income. Several of the local community leaders took it upon themselves to research the issue and gained the support from the Borough of Phoenixville to create a task force. The focus of the task force is to create affordable housing options for families and seniors/individuals with a fixed income."

Phoenixville is served by the Phoenixville Area School District, which has three elementary schools, a middle school and a high school. High school students can choose to attend the Technical College High School Pickering Campus for specific hands-on training in particular fields of study. The School District also serves the surrounding municipalities of East Pikeland and Schuylkill Townships.

All content from Kiddle encyclopedia articles (including the article images and facts) can be freely used under Attribution-ShareAlike license, unless stated otherwise. Cite this article:
Phoenixville, Pennsylvania Facts for Kids. Kiddle Encyclopedia.