Pottstown is a borough in Montgomery County, Pennsylvania, United States about 40 miles (55 km) northwest of Philadelphia and 20 miles (32 km) southeast of Reading, on the Schuylkill River. Pottstown was laid out in 1752–53 and named Pottsgrove in honor of its founder, John Potts. The old name was abandoned at the time of the incorporation as a borough in 1815. In 1888, the limits of the borough were considerably extended. Pottstown is the center of a productive farming and dairying region.

Pottstown is not to be confused with Pottsville, a city in Schuylkill County well known for being the home of the Yuengling brewery. 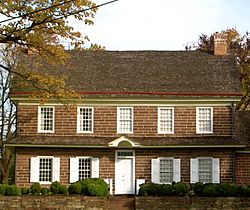 Pottsgrove Manor, located on the west end of town, was the home of John Potts.

Modern-day Pottstown is established on land originally deeded to William Penn. Germans, Swedes and English were among the first European settlers in the area. After establishment of the first iron forge in 1714, Pottstown's fortunes became tied to the iron industry.

Eventually, blast furnaces for production of iron and later steel opened in the area. Iron and steel production brought the Potts family, iron masters by trade, to the area. They established a forge in the area and built a large home just west of the Manatawny Creek. John Potts founded a town in 1761 on part of the 995 acres (4.03 km2) that he owned. It is the home of the nations oldest mills, Pottstown Roller Mill.

Over time, Pottsgrove grew and in 1815, was incorporated under the name Pottstown becoming the second borough in Pennsylvania after Norristown.

The Philadelphia & Reading Railroad mainline between Reading and Philadelphia reached Pottstown in 1838. The extension of the railroad to Mount Carbon in 1842 facilitated the movement of raw materials and finished goods which helped Pottstown's economy to grow. In the few years following the extension of the railroad, the population grew from 600 to 1,850 residents. Pottstown's metal production grew and notably, steel from the borough was used in the Panama Canal and Golden Gate Bridge.

In 1944, the borough adopted a city manager form of government. By 1964, the borough saw the need to re-organize the municipal government. At the time, it had one of the largest borough councils in the state, with 20 members. This was reduced to seven members in redrawn wards. 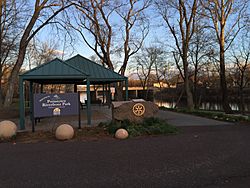 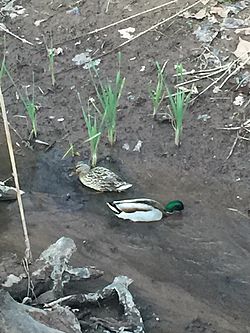 Ducks as seen inside the Schuylkill River in the Pottstown Riverfront Park.

The climate in this area is characterized by hot, humid summers and generally mild to cool winters. According to the Köppen Climate Classification system, Pottstown, Pennsylvania has a humid subtropical climate, abbreviated "Cfa" on climate maps. The hardiness zone is 7a bordering on 6b. 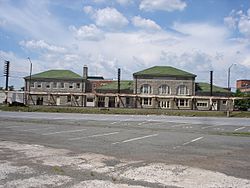 Bus service in Pottstown and the surrounding communities is a publicly owned and privately operated system. The Borough of Pottstown owns, funds, and administers the system. The day-to-day operations are the responsibility of Pottstown Area Rapid Transit, Inc. SEPTA's Route 93 bus connects Pottstown with the Norristown Transportation Center in Norristown.

Pottstown is serviced by Pottstown Municipal Airport, a general aviation airport, and a short distance from Pottstown is Heritage Field Airport located in Limerick.

Passenger train service between Reading/Pottstown and Philadelphia was operated by Conrail under the auspices of SEPTA until July 29, 1981, when all diesel services were terminated. Efforts to reinstitute commuter trains, such as the Schuylkill Valley Metro, have been unsuccessful. The station still exists and is currently home to a district justice office. The Colebrookdale Railroad is a tourist line running from Pottstown to Boyertown.

All content from Kiddle encyclopedia articles (including the article images and facts) can be freely used under Attribution-ShareAlike license, unless stated otherwise. Cite this article:
Pottstown, Pennsylvania Facts for Kids. Kiddle Encyclopedia.