The Colebrookdale Railroad, also known as the Secret Valley Line, is a tourist railroad located in the U.S. state of Pennsylvania. The railroad operates between Boyertown in Berks County and Pottstown in Montgomery County.

The Colebrookdale Railroad operates a variety of excursions originating out of Boyertown with plans to eventually have trains originating from Pottstown as well. The trains operated include a fall foliage train, Haunted History train, Santa Claus train, Valentine's Day train, Easter Bunny Express, Wine Tasting and Cheese Train, and Mother's Day and Father's Day trains. The railroad also allows groups to charter the entire train, or select cars, and to rent the caboose for birthday parties.

They currently operate a consist of 4 train cars; A deluxe coach, dining car, cafe car, and parlor car. They also have an open air gondola and a PRR caboose. A fifth passenger car will enter service in mid-November and will be a cross between a parlor car and a coach car. The deluxe coach, and parlor car are fully restored with their final interiors but the dining and cafe cars have yet to receive their final interiors.

Other cars that they own, but are not yet restored include a private car named The Lynwood, a baggage car that will eventually serve as a child entertainment center for the train, and an immigrant sleeper currently stored at their restoration shops. They are not currently planning on starting restoration on any of these cars for at least a few years. 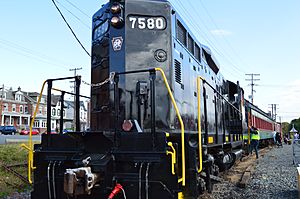 The inaugural excursion of the Colebrookdale Railroad on October 18, 2014, led by EMD GP10 7580 in Pennsylvania Railroad colors

The Colebrookdale Railroad started building the railroad line between Boyertown and Pottstown in 1865 to serve the iron ore industry along the Manatawny Creek and trains started running on September 6, 1869. The line, which featured both freight and passenger service, originally continued further north to Bechtelsville and Barto before service was later cut back to Boyertown. The Colebrookdale Railroad was leased by the Reading Railroad who operated the line until 1976, when it became a part of Conrail. Conrail planned to abandon the line, but the Pennsylvania Department of Transportation acquired the line and hired operators. The line was operated by the Anthracite Railway, the Blue Mountain & Reading Railroad, and Penn Eastern Rail Lines. In March 2001, Berks County acquired the line for $155,000 to keep it active; the line was soon sold to Penn Eastern Rail Lines. The Colebrookdale Spur was abandoned by the East Penn Railroad (the successor to Penn Eastern Rail Lines) in 2008.

The Berks County Redevelopment Authority reactivated the line, with the Eastern Berks Gateway Railroad appointed to operate the line beginning in October 2010. The company's non-profit parent, the Colebrookdale Railroad Preservation Trust, is working on developing freight traffic on the line. In 2011, a tourist railroad was proposed to operate on the line. Tourist passenger operations began in early October 2014 with a series of "soft" trips, intended to work out any operational issues before the first full season in 2015.

The Colebrookdale Railroad began regular tourist service on October 18, 2014. In early 2020 the railroad operators requested $25M from the county government for infrastructure improvements. The railroad had to turn away freight business because tracks and bridges needed reinforcement to support the weight of modern railcars.

The train, and location have been used in two independent films, Wandering Mind by Duncanfilms, and Sails Over Ice and Sea by The National Maritime Historical Society.

Wandering Mind is about two weary homeless men who get lost on deserted tracks following the sound of a distant train whistle, leading to a discovery that challenges their sense of reality. The tracks they get lost on is the Secret Valley Line of the Colebrookdale.

Sails Over Ice and Sea is about the Ernestina-Morrissey, and her 126 year history – from her start as she fished and carried cargo out of Gloucester, Nova Scotia and Newfoundland; explored the Arctic regions with Captain Bob Bartlett; traversed the Atlantic as a Cape Verde packet trader bringing immigrants and cargo to and from the shores of America. The train was used for numerous interior scenes depicting the captains journey to join his ship. The film crew used local extras to fill the train, and it actually snowed on the day they shot enhancing the feel of the scenes.

All content from Kiddle encyclopedia articles (including the article images and facts) can be freely used under Attribution-ShareAlike license, unless stated otherwise. Cite this article:
Colebrookdale Railroad Facts for Kids. Kiddle Encyclopedia.