The 2012 United States presidential election was on November 6, 2012. There were also elections for the U.S. Senate and U.S. House of Representatives. Barack Obama and his running mate Joe Biden won re-election for a second term.

By November 6, 2012, 11:30 PM ET (5:30 AM UTC), many broadcast networks said that Obama and Biden won the election. Mitt Romney of the Republican Party conceded the election to Obama around 1 AM ET on November 7. Gary Johnson of the Libertarian Party came in third.

Both parties choose who to nominate and then the two nominees face each other.

Barack Obama declared that he was running for re-election in 2012 on April 4, 2011. He had challengers in 7 states, but still managed to win all 57 democratic primaries and therefore the democratic nomination.

Scott Brown, Sarah Palin, Chris Christie, Donald Trump, Mike Huckabee, and Rudy Giuliani were considered possible candidates. All of them said that they were not going to run for president.

In May, a series of debates began between the Republicans. In August 2011, the Ames Straw Poll was conducted. It was won by Bachmann, with Paul coming in second. During the poll, Perry entered the race. After not placing in the top 2 in the poll, former Minnesota governor Tim Pawlenty dropped out. Thaddeus McCotter dropped out a short time later.

Rick Perry became the frontrunner (person with the highest amount of support who is expected to win, according to polls) of the party, ahead of Romney in the polls. Rick Perry then had several bad debates and in one of them he said he wanted to remove 3 government departments, but forgot one of them. After these mistakes, Perry's poll numbers went down.

In the fall, Herman Cain became the new frontrunner for several months. He had an economic plan called 9-9-9 that would replace the entire tax system with a 9% income tax, a 9% national sales tax, and a 9% corporation tax. During foreign policy debates, he was not as successful. On December 3, 2011, Cain left the Presidential race.

Newt Gingrich and Mitt Romney were the two main competitors after that, but soon after Newt Gingrich lost much of his support. Gary Johnson withdrew on December 28, 2011 to run for the nomination of the Libertarian Party.

In January 2012, after not doing well in the primaries, Bachmann, Huntsman, and Perry dropped out of the Presidential race. Rick Santorum, however, picked up a surprise win in Iowa, as did Gingrich in South Carolina.

For February, March and the beginning of April, Rick Santorum was Mitt Romney's main competitor. On April 10, However, with only 11 (primary) victories to Romney's 23, Rick Santorum announced that he was going to drop out of the race. Buddy Roemer dropped out on February 22nd to run for the nominations of americans elect and the reform party, before ending his campaign completely on May 31.

After Santorum dropped out, most people thought that Mitt Romney would win the most primaries, and therefore the most pledged delegates, and ultimately the nomination. His two remaining opponents, Newt Gingrich and Ron Paul, decided to stay in the race. Gingrich dropped out on May 2 after a disappointing showing in the Delaware primary that left his number of victories at 2 to Romney's 28. Paul, despite having only 1 victory to Romney's eventual 42 victories, did not end his campaign until after the 2012 republican national convention.

Santorum and Gingrich released their delegates ahead of the convention to vote for Romney.

At the republican national convention, with support from many pledged and unpledged delegates, Romney won the nomination in a landslide. The convention chose Paul Ryan as Romney's running mate.

Four other parties nominated candidates that had ballot access or write-in access to at least 270 electoral votes, the minimum number of votes needed in the 2012 election to win the presidency through a majority of the electoral college.

Many polls have been taken about the presidential election. Most polls show Obama beating Romney, aside from polls taken between the first and second presidential debates. In polls taken state-by-state, Obama usually wins states he won in 2008, and Republicans usually win states that McCain won in 2008. Indiana, North Carolina, and Nebraska's second congressional district are the main exceptions to the rule.

Popular vote count is preliminary, and does not include all precincts.

When you read "Consensus", it means that many news programs have said they believe Obama/Romney will win a particular state. A projection is when someone expresses their belief of something, in this case about the outcome of the election. An EV is an Electoral vote, from the Electoral college. 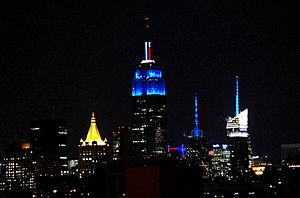 The Empire State Building was colored blue when Obama was said to have won the election.

Note: Florida was not called until November 10 due to an extremely close race.

All content from Kiddle encyclopedia articles (including the article images and facts) can be freely used under Attribution-ShareAlike license, unless stated otherwise. Cite this article:
United States presidential election, 2012 Facts for Kids. Kiddle Encyclopedia.