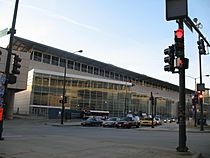 McCormick Place is the largest convention center in North America. It consists of four interconnected buildings on and near the shore of Lake Michigan. It is about 4 km (2.5 mi) south of downtown Chicago, Illinois, USA. McCormick Place hosts many trade shows and meetings. The 2012 NATO Summit in Chicago was held at McCormick Place. President Barack Obama made his 2012 election victory speech speech there. It was named after Cyrus McCormick.

All content from Kiddle encyclopedia articles (including the article images and facts) can be freely used under Attribution-ShareAlike license, unless stated otherwise. Cite this article:
McCormick Place Facts for Kids. Kiddle Encyclopedia.