Wynnewood is a suburban unincorporated community, west of Philadelphia, that straddles Lower Merion Township, Montgomery County and Haverford Township, Delaware County, Pennsylvania, United States. It was named in 1691 for Dr. Thomas Wynne, William Penn's physician and the first Speaker of the Pennsylvania General Assembly. Wynnewood is one of many neighborhoods on the historic Pennsylvania Main Line, and is the home of institutions such as Lankenau Hospital, St. Charles Borromeo Seminary, Palmer Theological Seminary, and Friends' Central School.

Residents of Wynnewood cooperate with those of adjacent Ardmore in many ways, one of which is the ArdWood Civic Association. South Ardmore Park is partly in Wynnewood, and partly in Ardmore. This park is the site of a free or low-cost summer camp, sporting activities, walking paths, and a verdant setting. 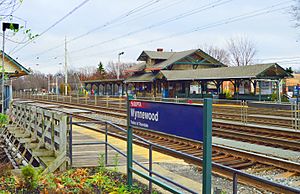 Opposite the Wynnewood Shopping Center is the Wynnewood train station. Built in the1870s, the vintage regional rail (SEPTA) train station (MP 7.5) was designed by Wilson Brothers and Company for the Pennsylvania Railroad. Towns on the lower "Main Line" adjacent to Wynnewood include Overbrook, Merion, Narberth, Ardmore, Haverford, and Bryn Mawr. The SEPTA Route 105 bus runs along the length of Lancaster Avenue on the Main Line, and the SEPTA Route 44 bus supplements the trains for service between nearby Ardmore and Narberth and Center City Philadelphia. South Wynnewood is served by the SEPTA Norristown High-Speed Line (former Route 100),which runs from the Montgomery County seat of Norristown through the central and eastern Main Line to 69th Street Transportation Center and connections to the Market-Frankford Line for service to Center City and Northeast Philadelphia.

Wynnewood is located along Lancaster Avenue (U.S. Route 30) and is also easily accessible from nearby Interstate Routes 76 (the Schuylkill Expressway east and west) and 476 (the Philadelphia bypass nicknamed the "Blue Route", traveling south and north between Chester and Interstate 95 in the south and Plymouth Meeting, Germantown, and the east-west Pennsylvania Turnpike in the north).

Other facts and features

The well-regarded 1962 dramatic film David and Lisa is said to have been filmed in part at and around the Wynnewood train station.

Also located in the community is Shortridge Memorial Park, a small park in a creek valley with stone bridges under which Indian Creek flows. Recently, the Indian Creek district has been ecologically revitalized and restored. Wynnewood residents are also active in the Wynnewood Civic Association and the Shortridge Association of Wynnewood.

Much of Wynnewood's public school children attend the Merion, Penn Wynne or Penn Valley elementary schools, part of Lower Merion School District headquartered in nearby Admore; Bala Cynwyd Middle School; and have a choice between Lower Merion High School and Harriton High School. Other schools, private and parochial, abound in this old and affluent residential district, including all-boys The Haverford School, all-girls Baldwin and Agnes Irwin schools, coeducational Friends Central School — actually within the Wynnewood postal district — and private, Catholic, Country Day School of the Sacred Heart in nearby Bryn Mawr, Waldron Mercy and Merion Mercy academies in nearby Merion. Saint Margaret's Elementary School in nearby Narberth also serves Wynnewood's Catholic elementary school community. There are other private schools such as Episcopal Academy (Merion), as well as Jack M. Barrack Hebrew Academy (Bryn Mawr) and the Solomon Schechter School (Wynnewood), which are both Jewish-affiliated schools. Finally, there is a French International School which has two locations—the lower school near the Bala Cynwyd Library and the upper school on City Avenue, still in Bala Cynwyd.

Saint Joseph's University is close by with parts of its campus in Merion, Bala Cynwyd and West Philadelphia; Villanova University, straddling Lancaster Avenue, and Rosemont College, on Montgomery, are also nearby, as are Cabrini College and Eastern University, both in nearby Saint David's. Haverford College is a non-denominational college on Montgomery Avenue in Haverford. St. Charles Borromeo Seminary is across the street from parts of Saint Joseph's University's campus. 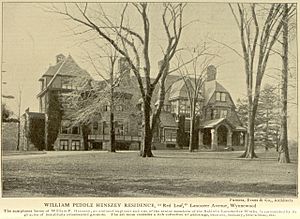 All content from Kiddle encyclopedia articles (including the article images and facts) can be freely used under Attribution-ShareAlike license, unless stated otherwise. Cite this article:
Wynnewood, Pennsylvania Facts for Kids. Kiddle Encyclopedia.