Narberth is a borough in Montgomery County, Pennsylvania, United States. It is one of many neighborhoods on the historic Pennsylvania Main Line. The population was 4,282 at the 2010 census.

Narberth is located on a parcel of land originally deeded to Edward Rees (which later became “Prees” and eventually “Price”), who arrived from Wales in 1682. A portion of this original tract became the 100-acre (0.40 km2) farm of Edward R. Price, who founded Elm as a Quaker-friendly town in 1881. The town name changed to Narberth in 1893, and Narberth was incorporated in 1895. In 1995, the borough celebrated its 100th birthday with a year-long celebration.

The Narbrook Park Historic District was listed on the National Register of Historic Places in 2003.

The median income for a household in the borough was $79,822. Males had a median income of $59,076 versus $41,518 for females. The per capita income for the borough was $35,165. About 2.6% of families and 3.4% of the population were below the poverty line, including 2.5% of those under age 18 and 6.4% of those age 65 or over. The borough has many square blocks of fine old Victorian homes and apartment buildings, and most its families live north and west of downtown areas, extending north along Montgomery Avenue to North Wynnewood Avenue.

Narberth is an enclave surrounded by Lower Merion Township, close to the western edge of the city of Philadelphia. It is part of the "Main Line", a string of leafy, picturesque suburbs with quaint Welsh names extending west from Philadelphia along the old Pennsylvania Railroad's "main line" from Merion through Ardmore, Bryn Mawr, Villanova, Devon and Wayne among other towns and municipalities. Narberth is unique among those locations in that it is fairly enclosed; no major thoroughfares run through the town, but Montgomery Avenue runs northwest/southeast along the borough's northern border.

Because of its small size, many of Narberth's shopping and recreational facilities within walking distance of residents' houses. SEPTA's "Main Line" railroad tracks separate North Side from South Side. Narberth is mostly a residential community, with a central business district along Haverford, Narberth, Forrest, and Essex Avenues.

The climate in this area is characterized by hot, humid summers and generally mild to cool winters. According to the Köppen Climate Classification system, Narberth has a humid subtropical climate, abbreviated "Cfa" on climate maps. 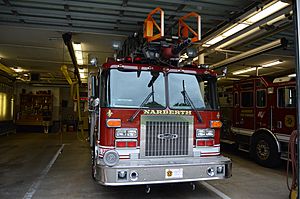 The Borough of Narberth maintains two recreational facilities: The Narberth Playground and the Sabine Avenue Playground. The Narberth Playground has two basketball courts, three tennis courts, a field area, a junior basketball court (once volleyball), and a playground for younger children. The Sabine Avenue Tot Lot, on the grounds of the former Narberth Elementary School, is the smaller of the two and was recently renovated with new playground equipment. In addition, the borough sponsors a Fall soccer program, a Spring baseball program, a Summer basketball program, and many other sports and recreation activities. 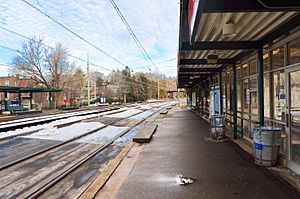 The Narberth Train Station, the third stop on the SEPTA Paoli/Thorndale Line, is located on Haverford Avenue in downtown Narberth. These railroad tracks run through the Main Line, the collective western suburbs of Philadelphia where the railroad westward was originally established. Towns on the lower Main Line adjacent to Narberth include Overbrook, Merion, Wynnewood, Ardmore, Haverford, and Bryn Mawr. The SEPTA Route 105 bus runs along the length of Lancaster Pike on the Main Line, and the SEPTA Route 44 bus supplements the trains for service between Narberth and Center City Philadelphia. South Wynnewood is served by the SEPTA Route 100 Trolley that connects the southern Main Line suburbs with Norristown to the north and west and SEPTA's 69th Street/Market-Frankford (Blue Line) rapid transit train service into Center City and beyond into Frankford north of Center City along the Delaware River.

Narberth is also served by Route 1, City Avenue, traveling north and south, and is easily accessible to Routes 76, the Schuylkill Expressway east and west, and 476, the Philadelphia bypass nicknamed the "Blue Route", traveling south and north between Chester and Interstate 95 in the south and Plymouth Meeting, Germantown, and the Pennsylvania Turnpike traveling east and west.

All content from Kiddle encyclopedia articles (including the article images and facts) can be freely used under Attribution-ShareAlike license, unless stated otherwise. Cite this article:
Narberth, Pennsylvania Facts for Kids. Kiddle Encyclopedia.