Penn Valley is an unincorporated community located within Lower Merion Township, Pennsylvania. Penn Valley residents share a zip code with Merion, Narberth, or Wynnewood because the town does not have its own post office. However, Penn Valley is a distinct community whose civic association demarcates the town's boundaries with iconic signs featuring William Penn and a farmhouse in blue or red on white, dating from the town's incorporation in 1930.

Penn Valley is one of the most Historic places in all of Pennsylvania. It houses the Penn Valley Women's Club, which was built in 1826-1828 where it served as a one-room weekday school and a place for Sunday religious gatherings. The original club was replaced with a new building, in 1876. However, that building was torn down, around 1926, but its remains can still be as of today. The original Penn Valley Women's Club is still visible and now houses The Penn Valley Civic Association. It was given repairs in the year, 2016.

Another historic building was located on 200 Fairview Road as a small frame house with a Queen Porch built for the Centennial. Even though the house had Class 2 Historical status the township's Historical Committee reached a compromise allowing the house to be demolished after realizing fire damage from a basement fire would cost an extensive amount to fix. The original house was demolished in August 2013 and a new house was completed in late 2014.

The 2010 Census found that Penn Valley has less than 4,000 residents. Racially, 88% of Penn Valley's residents are Caucasian, 4% are Asian, 2.4% are Hispanic, 1.8% are black and the rest are two or more races, Pacific Islander, American Indian or another race. Of Penn Valley's Caucasian residents, 14.7% have Russian ancestry and 4.0% have Eastern European ancestry.

Penn Valley's median income is more than $100,000 per family, statistically in the top 0.3% of the United States. None of the children in the town live below the poverty level. 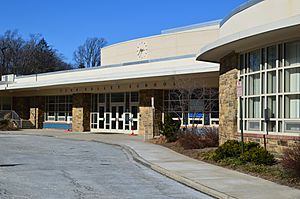 While no colleges are located directly in Penn Valley, many campuses are nearby. Saint Joseph's University is no more than ten minutes away, with parts of its campus located in Merion and Bala-Cynwyd; and Villanova University, with its main campus along Lancaster Avenue/US Route 30 just west of Bryn Mawr. Other nearby colleges include Rosemont College; Haverford College; and the internationally renowned Bryn Mawr College

Lower Merion Township maintains its recycling and refuse burning center at the foot of Woodbine Avenue in Penn Valley, just beyond the limits of Belmont Hills, the easternmost section of the township that slopes down to the Schuylkill River, flanked by Fairmount Park.

Police and public works are managed in the Lower Merion Township Office Building at 75 East Montgomery Avenue in Ardmore.

Penn Valley is served admirably by the Lower Merion School District, headquartered at the bend of Montgomery Avenue in Ardmore where it meets Church Road, across from Lower Merion High School's Hap Arnold Field.

The Narberth train station is located a scant mile from the "business district" of Penn Valley on Montgomery Avenue; Merion and Ardmore stations are roughly three miles to the east and west of the district, respectively. All three have heated, enclosed waiting areas, public restrooms, and pay phones. Taxi service is summoned by telephone. Approximately 10% of Penn Valley's residents take the train to work.

Both Bryn Mawr and Lankenau Hospital are located within 5 miles of Penn Valley.

Penn Valley is well served by the large and well-endowed Lower Merion Library System, part of the Montgomery County Library System and an affiliate of the numerous excellent academic and professional libraries in Philadelphia and its suburbs. The Lower Merion Library System just renovated (2012) its Narberth Free Library, bordering Narberth Field on Essex Avenue; its Ardmore Free Library on Ardmore Avenue just south of the US Post Office (2013); and the system's central Ludington Memorial Library of Bryn Mawr at the corner of Bryn Mawr Avenue and Lancaster Avenue (Route 30) (2014). Other excellent Lower Merion libraries just a short drive from Penn Valley include the Gladwyne Free Library in the village; the Bala-Cynwyd Library on Old Lancaster Road less than a mile from 54th and City Line Avenue; and the Penn Wynne Library south of Lancaster Pike. Residents of Lower Merion have free access to all of the libraries in the system. All of the libraries have a large variety of books, audio-visual materials, and electronic resources.

Penn Valley has its own Little Free Library, which is a wooden box located on Hagys Ford Road between Margo Lane and Righters Mill Road. One must follow a certain procedure: In return for taking the book you want from the wooden box, you deposit another in its place. 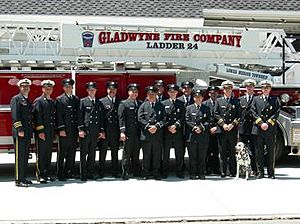 All content from Kiddle encyclopedia articles (including the article images and facts) can be freely used under Attribution-ShareAlike license, unless stated otherwise. Cite this article:
Penn Valley, Pennsylvania Facts for Kids. Kiddle Encyclopedia.