Ayrshire cattle (IPA) are a breed of dairy cattle from Ayrshire in southwest Scotland. The adult Ayrshire cow weighs from 450 to 600 kilograms (990–1,320 lb). Ayrshires typically have red and white markings; the red can range from a shade of orange to a dark brown. They are known for their hardiness and their ability to convert grass into milk efficiently. The breed's strengths today are traits of easy calving and longevity.

Origins. It is generally accepted that the breed originated in Ayrshire. However, Richard Feachem an acknowledged authority on the history of Scotland writes in his book (The North Britons - Hutchinson, 1965) "...a tradition which has lately been crowned with success by development of the Ayreshire breed;...foreigners admittedly to the country of their adoption..."

The breed originated in the county of Ayrshire in Scotland before 1800. During the breed's development, it was referred to as the Dunlop, later the Cunningham, and finally, the Ayrshire. These are all parts of the County Ayr. Which strains of cattle were crossbred to create the Ayrshire is not known.

Although they are now native to Ayrshire, Scotland, many cattle historians believe the Ayrshire breed originated in Holland. In 1750, they were crossbred with other breeds of cattle, which led to their distinctive brown spots. The cattle were recognised as a distinct breed by the Highland and Agricultural Society in 1814. Many modern dairy farmers favour Ayrshires because of their longevity, hardiness, and easy calving. These traits are thought to have developed due to the rugged conditions of its native habitat.

Ayrshire cattle were first brought to the United States in 1822, primarily to Connecticut and other parts of New England. The environment was similar to their native land of Scotland. The American Ayrshire Breed Association was founded in 1875. The Approved Ayrshire Milk programme, which licensed farms that owned Ayrshire cattle, began in the 1930s. Ayrshire milk was identified as being of higher quality compared to that of other breeds. Today, the cattle are owned by farmers in many areas of America, including New York and Pennsylvania. 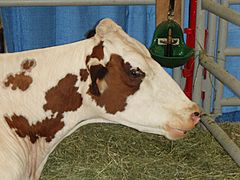 The head of an Ayrshire cow

The Ayrshire is considered to be a medium-sized breed by most conservation organisations and breed associations. The average adult individual "should weigh over 1,200 lb (540 kg) at maturity." Their milk production can reach 20,000 lb (9,100 kg) or greater per annum.

Ayrshire cattle are usually red and white in colour. The red colour can vary from very deep to a lighter shade; according to the U.S. Ayrshire Breeders' Association, "[t]here is no discrimination or registry restriction on color patterns for Ayrshires." Calves are normally dehorned to reduce injuries to other cattle and human handlers. If they are not polled, their horns can grow up to 30 cm (12 in) in length. Due to the environment of their native Scottish lowlands, they are typically strong and adaptable to many farming methods. Compared to other dairy breeds, such as the Holstein-Friesian, Ayrshires are usually able to survive despite less feed and less fertile ground.

A study of the social behaviour of Polish Black-and-White dairy cattle and their F1-crossbreds with Ayrshire, Jersey, Holstein-Friesian and Swedish Black-and-White breeds, found the Ayrshire crossbreeds were most dominant, least attacked by their group-mates and least susceptible to a group change. A further study found that among Ayrshire, Holstein, Jersey, Brown Swiss and Guernsey (the other common dairy breeds), the Ayrshire had the highest number of agonistic interactions, however, this was not related to bodyweight.

In 2008, 63,356 Ayrshire cattle were registered in the United Kingdom. In the United States, Ayrshire cattle are classed as a "recovering" breed by the Livestock Conservancy, despite a significant decline in registrations over the last 30 years. This means more than 2,500 registrations occur annually, but the breed is "still in need of monitoring."

All content from Kiddle encyclopedia articles (including the article images and facts) can be freely used under Attribution-ShareAlike license, unless stated otherwise. Cite this article:
Ayrshire cattle Facts for Kids. Kiddle Encyclopedia.