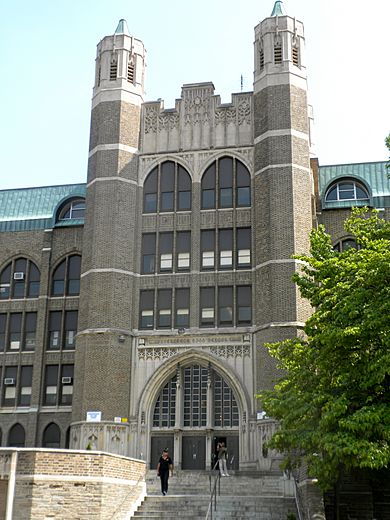 Overbrook is a neighborhood northwest of West Philadelphia, Philadelphia, Pennsylvania. The area's housing ranges from large, old homes to rowhouses to 3- and 4-story apartment buildings.

West of the Overbrook neighborhood is Morris Park, which derives its name from the eponymous park on the neighborhood’s western edge. The eastern boundary of the neighborhood is North 63rd Street. On the north, the boundary is Woodbine Avenue between North 63rd Street and Wynnewood Road, Wynnewood Road between Woodbine Avenue and Malvern Avenue, and Malvern Avenue between Wynnewood Road and North 68th Street. On the west, the boundary is North 68th Street and Morris Park between Malvern Avenue and Haverford Avenue, Cobbs Creek Park between Haverford Avenue and North 67th Street, and North 67th Street between Callowhill Street and North Gross Street. The southern border is Arch Street at North Gross Street, bordering Cobbs Creek Park. The Roman Catholic parishes of St. Donato and St. Callistus are in the Morris Park neighborhood. On the corner of North 66th Street and Lansdowne Avenue, there is a mural (“Overbrook: A great place to live together"), green space, and a garden called Vito's Garden.

Greater Overbrook is in the Fourth Councilmanic District of Philadelphia, represented by Councilman Curtis Jones, Jr., elected on October 10, 2006 to a first term. The 19th Police District of the Philadelphia Police Department protects Overbrook.

Overbrook developed in various stages between 1900 and 1960. The dominant housing type is the row house, present in a wide variety of styles. Built in the early 20th century when trolley lines were allowing middle-class Philadelphians to move out from more crowded row house communities, Overbrook was a community of choice when it was built. Real estate advertisements in the Philadelphia Inquirer in the 1920s referred to the area as “exclusive.” Facades of all kinds grace the fronts of otherwise uniform brick and stone rowhouses. Typical rowhomes in Overbrook are between 1000 and 1,700 square feet (160 m2) in size. Companies such as the McClatchy Company, the John McGinty Company, and smaller developers such as the Moss and Taylor Company constructed most of Overbrook’s rowhouses. Outside of Overbrook Farms, most of the houses in the Overbrook area date from between 1915 and 1930, when the Great Depression halted new construction nationally and locally.

In addition to rowhouses, one can find a sizeable number of twin (semi-detached) houses. These semi-detached homes have two or three floors and typically are over 2,000 square feet (190 m2) in size. Prime examples of typical Overbrook twin houses are along Wynnewood Road from Haverford Avenue to Malvern Avenue, North 64th Street between Lansdowne and Lebanon Avenues, or Nassau Road between North 61st and 63rd Streets.

There are very few detached single-family homes in Overbrook. Single homes typically pre-date the construction of most of Overbrook’s housing or came into existence on select lots after the construction of most of the rowhouses and twin houses. For example, one will see a few single-family homes on Wynnewood Road near Columbia Avenue. A large stone home remains this intersection. This home once sat on acres of land that the owner(s) sold off to developers who then constructed twin houses and rowhouses. The vast majority of the single-family, detached homes in the Overbrook area are in the Overbrook Farms neighborhood. 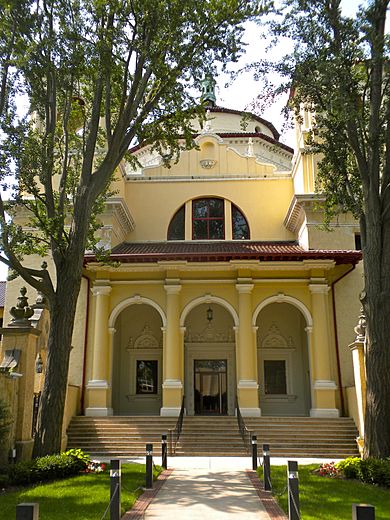 Overbrook School for the Blind

Overbrook, while overwhelmingly residential in character, does have several notable landmark buildings and institutions

All content from Kiddle encyclopedia articles (including the article images and facts) can be freely used under Attribution-ShareAlike license, unless stated otherwise. Cite this article:
Overbrook, Philadelphia Facts for Kids. Kiddle Encyclopedia.