Fort Washington is a census-designated place and suburb of Philadelphia in Montgomery County, Pennsylvania, United States. The population was 5,446 at the 2010 census.

Prior to the Revolutionary War

The Fort Washington area was settled by many German immigrants. One such person was Philip Engard who immigrated in 1728. Engard purchased 100 acres (40 ha) on what was to be named Susquehanna Road and Fort Washington Avenue. By the mid-18th century the area came to be known as Engardtown, and Fort Washington Avenue was originally called Engardtown Road. The house built by Philip Engard is listed as the "Engard Family Home - 1765" in the Upper Dublin Township Open Space & Environmental Resource Protection Plan - 2005, as part of the Upper Dublin Historical Properties #25. 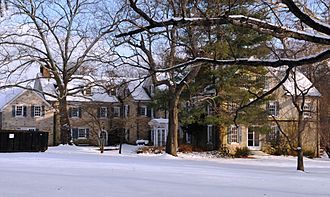 During the Philadelphia campaign of the American Revolutionary War, George Washington and the Continental Army were encamped here after their October 4, 1777 defeat at the Battle of Germantown, and immediately prior to their march to Valley Forge. From December 5–8, 1777, the Battle of White Marsh was fought here between British and American forces. Throughout the encampment, Washington was headquartered at the Emlen House, built by Quaker George Emlen in 1745. British commander General William Howe observed the American lines from the bell tower of St. Thomas' Episcopal Church (at Bethlehem Pike and Camp Hill Road), site of the British encampment on December 5. Today, Fort Washington State Park contains the area in which the primary American defenses were situated.

On July 17, 1856, Fort Washington was the site of one of the worst train accidents in the United States when two North Pennsylvania Railroad trains collided with one another near the Sandy Run station (later renamed to Camp Hill, now the defunct Fellwick Station). The exact number of deaths is uncertain, but 59 were killed instantly and dozens more perished from their injuries. Many of the dead were children from St. Michael's Roman Catholic Church from the Kensington section of Philadelphia, who were traveling to Sheaff's Woods, a park in the Fort Washington area, for a Sunday school picnic.

On January 1, 1946, the Township of Upper Dublin was created, and in doing so, encompassed Fort Washington along with nine other communities. Parts of Fort Washington were also incorporated into Whitemarsh Township.

There were 1,161 households, out of which 45.4% had children under the age of 18 living with them, 81.7% were married couples living together, 4.2% had a female householder with no husband present, and 12.7% were non-families. 10.9% of all households were made up of individuals, and 4.0% had someone living alone who was 65 years of age or older. The average household size was 3.06 and the average family size was 3.32.

All content from Kiddle encyclopedia articles (including the article images and facts) can be freely used under Attribution-ShareAlike license, unless stated otherwise. Cite this article:
Fort Washington, Pennsylvania Facts for Kids. Kiddle Encyclopedia.