Whitemarsh Township is a Home rule municipality in Montgomery County, Pennsylvania, USA. However, it retains its former classification of "Township" in its official name. The population was 17,349 at the 2010 census. Whitemarsh is adjacent to the neighborhood of Andorra in the Roxborough section of Philadelphia, and is bordered in Montgomery County by Springfield, Upper Dublin, Whitpain, and Plymouth townships, and by Conshohocken Borough. It is also bordered by the Schuylkill River, which separates it from Lower Merion Township. Communities within Whitemarsh Township include: Barren Hill; Lafayette Hill; part of Miquon (which straddles Whitemarsh and Springfield townships); Spring Mill; part of Plymouth Meeting (which straddles Whitemarsh and Plymouth townships); and part of Fort Washington (some of which is in Whitemarsh, but most of which is in Upper Dublin Township). 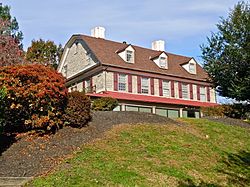 Whitemarsh was originally inhabited by the Lenni Lenape tribe of Native Americans. It was first settled by European colonists in 1683, as part of a tract of land purchased from William Penn by Major Jasper Farmar. Though Major Jasper Farmer died before making the voyage to his new land, his widow and family sailed, with servants, to Philadelphia in 1685. They established their homestead in Fort Washington. After the Widow Farmer died sometime in the 1690s, her son Edward began to sell 100 to 200 acre pieces of the township to Quakers and German immigrants.

In 1686, the discovery of limestone in Oreland in nearby Springfield and Upper Dublin townships, and subsequent discoveries of limestone in the township itself, drew settlers to Whitemarsh Whitemarsh Township was incorporated in 1704 as part of Philadelphia County and was one of the 28 original communities that comprised Montgomery County when it was created in 1784. The area in the 1600s and 1700s consisted of large English estates and its famous limestone quarries.

During the American Revolutionary War, both the Battle of White Marsh and the Battle of Barren Hill took place within the township.

Adjacent to the Andorra section of Philadelphia, Whitemarsh is bordered in Montgomery County by Springfield, Upper Dublin, Whitpain, and Plymouth Townships and Conshohocken Borough. It is also bordered by the Schuylkill River, which separates it from Lower Merion Township.

There were 6,179 households, out of which 34.4% had children under the age of 18 living with them, 64.4% were married couples living together, 7.1% had a female householder with no husband present, and 25.6% were non-families. 20.8% of all households were made up of individuals, and 7.3% had someone living alone who was 65 years of age or older. The average household size was 2.62 and the average family size was 3.06.

The Fort Washington State Park is a 483-acre (1.95 km2) site located in the middle of the township, along the Wissahickon Creek. Miles Park Which is located on Germantown Pike at the intersection of Joshua Road includes basketball courts, baseball fields and a walking track. It also has a snack bar and has vending machines. The Philadelphia Cricket Club has two golf courses in Whitemarsh Township.

The most prominent of these are the Lansdale/Doylestown and Manayunk/Norristown Southeastern Pennsylvania Transportation Authority (SEPTA) rail lines, both of which have stations in the township. The Lansdale/Doylestown Line, which connects Bucks, Montgomery, and Philadelphia Counties has a station in the Fort Washington section of the township. The Manayunk/Norristown Line, which runs along the Schuylkill River, has two stations located in Miquon and Spring Mill.

There are no airports in Whitemarsh Township. The closest airport is the Wings Field.

The Colonial School District provides public education to the children of Whitemarsh Township.

All content from Kiddle encyclopedia articles (including the article images and facts) can be freely used under Attribution-ShareAlike license, unless stated otherwise. Cite this article:
Whitemarsh Township, Montgomery County, Pennsylvania Facts for Kids. Kiddle Encyclopedia.