Harleysville is a census-designated place (CDP) in Montgomery County, Pennsylvania, United States. It is a suburb of Philadelphia. The population was 9,286 at the 2010 census. It is located mostly within Lower Salford Township and also in Franconia Township. Harleysville was settled by Pennsylvania Dutch in the 18th century and was named after Samuel Harley.

Harleysville was settled early in Pennsylvania’s history (circa 1700).

Harleysville is home to an annual Heckler Fest held at the historical Heckler Plains, one of the oldest properties in the area.

Harleysville holds an annual Jaycee's Country Fair Days at the Harleysville Community Center, which many people from close by towns come to.

It is also home to the Mennonite Heritage Center.

The Klein Meetinghouse was listed on the National Register of Historic Places in 1973.

Harleysville was home to Bloodhound Gang bass player when he attended Indian Valley Middle school from 1983-1986.

Harleysville is served by the Harleysville Community Fire Company, a 100% volunteer organization founded in 1922.

According to the United States Census Bureau, the CDP has a total area of 4.2 square miles (11 km2), all of it land.

Route 63 and Route 113 meet in Harleysville and provide access to other routes on the main grid. Interstate 476 is a five-minute drive via 63 from Harleysville to the Lansdale Interchange, on the Northeast Extension of the Pennsylvania Turnpike.

Harleysville is in the watershed of the Perkiomen Creek (a tributary of the Schuylkill River) and is drained by the Indian Creek and Skippack Creek into the Perkiomen. 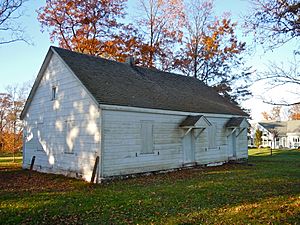 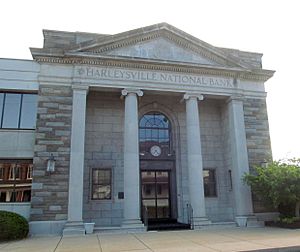 There were 3,129 households, out of which 41.6% had children under the age of 18 living with them, 66.6% were married couples living together, 7.1% had a female householder with no husband present, and 23.9% were non-families. 19.5% of all households were made up of individuals, and 7.6% had someone living alone who was 65 years of age or older. The average household size was 2.76 and the average family size was 3.21.

Harleysville is home to a large-scale exterior mural designed by Dana McMullin, residing on the side of Rann Pharmacy, a privately owned and operated pharmacy since 1982. McMullin executed the public work with a small team in 2006 from its concept to production, portraying a visually nostalgic history of Harleysville from settlement to modern day.

All content from Kiddle encyclopedia articles (including the article images and facts) can be freely used under Attribution-ShareAlike license, unless stated otherwise. Cite this article:
Harleysville, Pennsylvania Facts for Kids. Kiddle Encyclopedia.